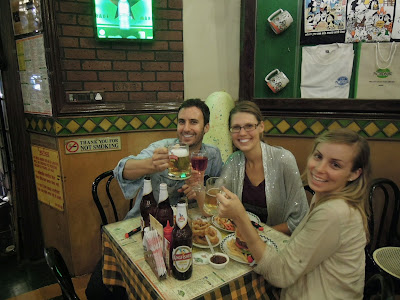 We went out last night for our friend’s birthday. He has had enough Indian food for a while and we decided to go to the tourist area where there are a couple restaurant that serve western food and drinks. As we are waiting for our other friend on the street I am approached by a Bollywood recruiter!  As this guy started talking to me, I already knew that our friend wanted to be a Bollywood star, so of course I agreed to appear as an extra sometime during our stay. His next question was “Can you dance?” I said “sure, I can follow some steps”, and he continued to explain how he needs some girls to dance live during the biggest cricket match in India this weekend. I laughed since we had tried getting tickets for this game but they were sold out and now we are being offered to dance for them and watch it from the sidelines!
I wasn’t sure if this guy was legitimate but a French girl walked by us on the sidewalk who happened to be an extra earlier that day and started telling me how much fun it was getting fed and paid on set while scoping out the film industry. So we went for our dinner all excited about being Bollywood stars and cricket cheerleaders. We carried on to another bar where we met up with the same guy for a beer and which he then told us that we have to be able to do the splits and some kind of flip if I understood him correctly! So since I am not that talented I won’t be centre stage of the cricket match this weekend but will definitely be getting paid to be in the Bollywood film industry soon!!