The capital. What can I say? It is a huge city with lots to see and do, and is the most modern place I have visited yet in India. It had wide streets, less traffic and everybody drove on their own side of the road (most of the time).  One thing that I was surprised about was the lack of slums and people living on the street, I am not sure if there were actually less of them or they were just not as prominent in the city centre. Delhi was also a lot more touristy, with monuments and temples and forts to visit we had a few very busy days amid 40 plus weather. However the best part was meeting friends from home! 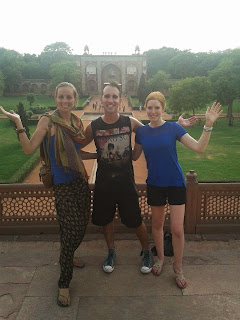 Two of my best friends made their way from opposite ends of the world to meet me here in the capital of India. I was so excited to show off my Hindi and everything I knew about this country and catch up like old times. Luckily they both stopped at the duty free which ensured some laughs and good times.
Most of our days were spent sightseeing or playing scavenger hunt for the train ticket office (squeezing five people in a rickshaw only added to the fun), but we set aside a whole day just to see the Taj Mahal. It is actually located in Agra, three hours south of Delhi, so our day began at 4am. We were lucky to arrive early since we were able to miss some of the crowds and a bit of the heat.
From my architecture history classes, this building has always been on my “to see” list for its symbol as an international icon as well as its perfect symmetry and intricate marble detailing. It has been a while since I was quizzed on the facts, but I knew at least from my Hindi that “mahal” means palace and thanks to Slumdog Millionaire I knew it was built for a queen after she died. The accuracy and alignment of its design was beautiful and the white marble (unbelievably clean for being India) seemed so light and luminous against the overcast sky that the entire building almost felt like an illusion. 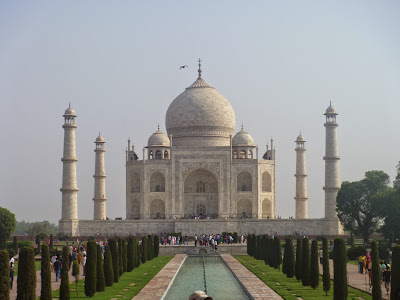 I was expecting a grand palace like Versailles that is filled with gardens, corridors and numerous ornamented rooms, but this was quite the opposite. I probably should have known this, but the inside of the Taj Mahal consists essentially of one room which holds the tombs of the queen and her king who built it (his tomb is the only thing that is off centre and non-symmetrical in the entire structure since it was added later and not originally designed to be kept here). After experiencing the extravagance and enormous presence that the building has from the exterior, visiting the single spaced interior was a little anticlimactic. It did not take as long as we thought to see everything and the guide we hired was not worth it, besides showing us where to stand for the cheesy cliché photos. Nevertheless, it was an amazing building to experience and it still feels a little surreal to think that I was in the presence of something so perfect.