After thankfully getting a sleeper bed for my 22 hour train ride, I was well rested upon arriving to Guilin, South China. Too bad I still couldn’t tell my left from my right and went in the complete opposite direction of my hostel. This was the first place where the heat hit me in the face as i walked outside so it didn’t take long before i was asking for directions. It’s great that the Chinese seem to love me, because they are always willing to help me when I’m lost, it’s just too bad they rarely speak English! So with some hand signals and phone calls I found my cheapest hostel yet for a dollar a night – which also turned out to be one of the best hostels I have stayed at yet! I met some other fun people and explored the markets, learned to play mahjong and tried my first street BBQ.

So I came to Guilin because I was told about the elaborate rice terraces and the stunning scenery. So the next day I booked a tour to visit the terraces. These are rice fields built into the mountainside since the 12th century. Now the terraces cover a huge area and attract tourists to the little mountain towns in between. This was the first organized tour I tried so I was a little nervous about it being a whole day but relieved that it was led by an English tour guide. Unfortunately after boarding the bus and realizing I am the only non-Asian person it was evident this was not in English. So after the others on the bus got an earful of facts and itinerary I was getting annoyed. And this reaction only intensified when we were brought to an extra town on the way home and told to pay again to enter or wait in the parking lot for an hour and a half…. Good thing I brought a book!

But it was worth putting up with a bad tour to see the undulating rice terraces and traditional communities.
The terraces make the mountains look like they are man made, yet they are so vast and precise it’s hard to believe they have been there so long without using any modern machinery. It’s a surreal cultural landscape since each terrace is flooded with water for the rice to grow, all of them together make the hillside reflective and seem liquified. A specialty I was given for lunch consisted of a bamboo stalk stuffed with sticky rice and veggies, they throw it in a fire and then crack it open in front of you to eat out of… Tasty treat!

So I spent the rest of the day meandering up and down the paths connecting the villages among these spectacular terraces. 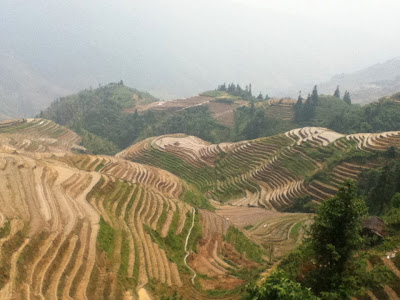 As for the scenery that I came for, that was the next town over, Yangshuo. So I took a bamboo raft down river and floated in between some of the weirdest mountain formations. This was one of my favorite experiences in china; finally getting out of the chaos of the city and enjoying the natural outdoors. As depicted on the back of their 20rmb note, the limestone mountains sprout up individually from the flat river valley. So my raft (which does have a motor) had 6 seats, but as I was carefully climbing aboard, an army of Chinese kids piled on and took all the seats! So the guy grabbed a few more lawn chairs and we had a loud, full boat! It was a really warm day and quite relaxing to float down the calm river dipping my toes in the water.

Yangshuo is a funny place. One man compared it to the main drag in banff, which is understandable for being a quaint tourist trap amid a spectacular natural setting. It’s a popular spot for rock climbers because of the cliffs and caves. Unspent most of my time bicycling around, stopping to hike what mountains I could and caves I dared to explore… Most of the time the bats chased me out!

I had a couple bad hostel experiences but finally found one with some fun people and a fantastic view. This place feels so isolated and unlike anywhere else in china. The landscape is so bizarre that it’s easy to imagine your on another planet. I couldn’t stop staring and taking pictures, just trying to comprehend it; how these shapes were ever formed?  With the misty sky and endless lush protrusions it just feels like a dream, as if there is a giant frozen audience surrounding you.
I would definitely make a trip back here if I am ever in China again!