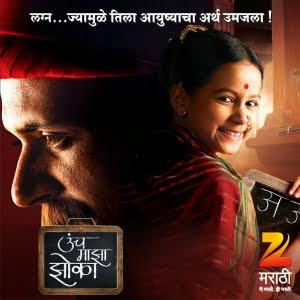 So Bollywood finally called me! We had been asked to act a couple of times before but weren’t able to go because we are working. This time they only needed one person and told me to meet someone at the train station to take me to the set. I was a little nervous going on my own since I thought that they might try to steal me to sell on the black market! All I knew about the day was that I was going to be playing an English teacher.
The guy I met turned out to be really nice and brought me to Film City – the biggest Bollywood film studio in Mumbai, however it looked much more rural and deserted than I imagined. The set was also not as fancy as I had hoped. A couple wood shacks in a field with barely anyone in sight, I had to keep reminding myself “this is Bollywood NOT Hollywood”! I was shown a room with two beds and a mirror and told to relax and have a rest which was nice since I was really tired after getting up so early. People started to arrive and my air conditioned shack turned out to be the dressing room for the ladies. Most of the actors didn’t speak English, but one friendly actress came in, looked at me standing there and said “nice height” I just laughed and said thanks, since I didn’t think I should complement her five feet.
They took me to another room for hair and make-up, where they caked on so much dark make up that I must have gained ten years! And for some reason they straightened my straight hair. I was starting to get excited thinking they are making me into this hot foreign teacher, showing blond hair and wearing my western clothes. Then I saw my costume and couldn’t help but laugh out loud. I was going to be a nun with absolutely everything covered right up to my chin! And with this came with a dozen pages of lines to memorize – I was going to be a reappearing character in the series! 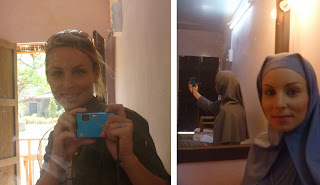 It turned out that I was appearing as a character on a historically based Marathi soap opera about child marriages (Marathi is the provincial language of Maharashta). I don’t think they knew I had zero acting experience since I had very expressive lines in every scene…. I just wanted to be an extra! Luckily my takes weren’t until the afternoon so I tried to memorize as much of the broken English as I could until accidentally falling asleep. I also had to memorize some lines in Marathi, of which I surely butchered the pronunciation!
Shooting the scenes wasn’t as bad as I expected, yet they seemed to go on forever. There were little takes of just me walking up and down stairs or shaking people’s hands and many were just filmed talking to a white screen instead of real actors (which was so much easier since they could feed me the line). It took me a while to get the hang of starting on cue, I kept forgetting to wait for him to call “action”! One of the scenes was going to be used for a musical mantage of me teaching the lead girl. I was handed a book meant to be the bible and told to read it aloud and pretend to teach her. As the content didn’t matter, the book was actually a classic crime thriller, and the page I randomly flipped to was of people shooting and robberies. So I read a few lines and said to the star, saying repeat after me: get-a-way-car. She knew English and we both started laughing.
There were about thirty people on the set in the fake house, and it seemed everyone had a specific task. My favourite was the guy in charge of the fan, he had to shut it on and off in between takes since it makes too much noise while the cameras are rolling (he kept pointing at me after noticing how much I was sweating!). I guess I am still not accustomed to the heat, since after the first scene there was a pool of sweat accumulated around my feet (I have refrained from blogging about my perpetually sweating feet). I also had to to take a drink of water on screen, but in India instead of touching the cups to their lips, people pour it into from above, I am guessing for hygienic reasons – however I am surprisingly terrible at this! By the third try I had water down most of my top and everybody on set was laughing. Once again the fan guy came to my rescue by drying my costume, although I think they will cut that scene!
I ended up being on set for 12 hours (6 hours filming and 6 hours waiting/napping), and my part is still not finished! So I am going back tomorrow, I am not sure if it was worth the little bit I got paid but definitely gave me a glimpse into an entirely different world and a new perspective of this multifaceted city!
Check out my scenes! (the first and last ones are better)