We have nearly gotten run over, trampled and horned (by oxen) during our first couple days in Mumbai. Getting around here and learning how to stay in one piece on the streets definitely took some practice. There are a billion different things happening between the facades of opposing buildings of which the activities have no clear boundaries and are continuously adapting to the immediate circumstances.

We began by walking. Our first instinct was to use the sidewalk but since they are often in such terrible condition, nonexistent or occupied as family living rooms, the road becomes a better option. That is until the traffic comes, and it comes in every form and speed and direction possible. From cars to bikes and oxcarts to wheelbarrows, having people drive on the left side of the road doesn’t help me to predict where things are headed. In comparison to Spain where the cars look like they are going to kill you but always seem to stop just in time, here the traffic is slow but will definitely hit you if you are in the way.

Instead of lanes, traffic signals and sidewalks, the road is full of shops, vendors, parking; it is no wonder that the horn is a necessity here. Car horns, bicycle bells and even people yelling determines who gets through the crowd. In Canada, as other places I have visited, horns are used to get attention and avoid collision, here they are part of signaling and communication. Since every form of transportation inhabits the same space, horns let people know to get out of the way. This has become so prevalent now that many people continue to honk down wide empty streets and don’t even bother to turn on their lights at night time.

My only guess at the origin of this chaotic manoeuvering is that India has skipped the prerequisites necessary to for vehicles to function properly. It’s like cars came before roads and regulations, and everybody just decided that it was easier to honk. Now due to the scrambled congestion you can barely drive more than 50km/h in the city. Although I do think you must be a good driver to put up with all this since it isn’t easy driving a manual while steering and continuously honking! Many of our taxi rides feel like a video game where you have to avoid random things jumping out at you:
–          A man with baskets on his head
–          A family on a motorbike
–          A dog or goat in the middle of the road
–          A man pushing a wheelbarrow cuts you off (somehow he is going faster than you)
–          A ox pulling a fruit cart is coming straight for you
–          A mother and children suddenly cross the street 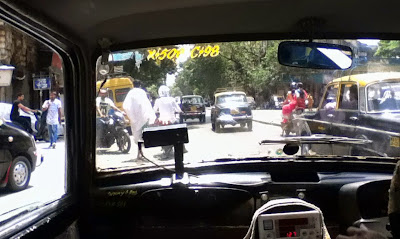 The train is another story. I haven’t taken a long distance over night train yet, but the ones within the city are crazy enough. The doors don’t close! And yes they are jam packed much of the time, but I have yet to see somebody fall out (I have asked and it does happen). But oddly enough the edge of the carriage with your head poking outside is the best spot on the train, since you get a warm breeze rather than the armpit of the guy next to you (don’t worry mom, I don’t stand there since the ladies coach is much less crammed and doesn’t smell as bad).

The other crazy thing is how cheap the trains are. A return trip across town costs 40 cents or less and it is way faster than driving! There are also different types of train compartments. On our first trip we accidentally got on the “Handicapped and Cancer Patients” car, and then moved to the luggage car full of leaky fish bags where we got dirty looks before moving to the over packed men’s second class passenger car.
Anyways this is a huge city and it takes a lot of energy to get around in this heat. I am pretty good at crossing the road now but I don’t think my headache from the constant honking will ever go away.The frenzied mess of vehicles on the street is also growing on me… whenever I am in a rickshaw now I just pretend like it is bumper cars and enjoy the ride!