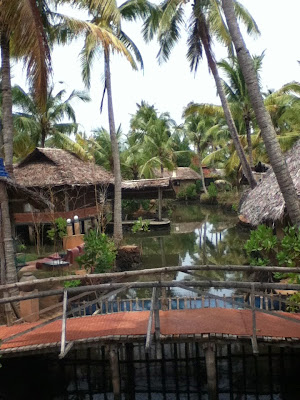 Our first trip out of Mumbai was to the South, and it was so relaxing and such a contrast to what we knew of India from living in one of its mega cities. Our trip began at the beaches and backwaters that the region is known for. We decided to splurge (20$) and stay one night in a resort full of traditional huts among the lush vegetation and backwaters (and air conditioning). We arrived really early and went straight to the beach where we could wear our normal bathing suits before the Indian crowds arrived -the Indian women stayed fully dressed while in the water. It wasn’t incredibly sunny at first but we still managed to get burnt while playing in the water and watching kids play “kick the crab”.
We had originally chosen to visit this area because of a huge elephant festival 3 hours away, however after asking multiple people that have never heard of the town, they could not confirm our intentions. Luckily Kerala is full of wild elephants and random elephant festivals. Ten minutes from our resort there happened to be a celebration that afternoon that called for five decorated elephants! We were happy to find lots of friendly people who showed us around to meet all the elephants, their homes and preparations and the even tried to explain the events to us! 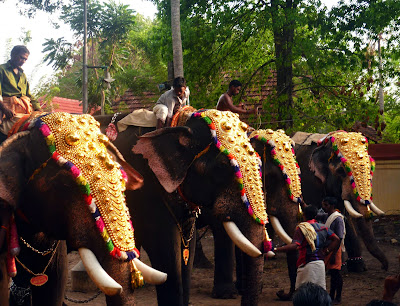 Fort Kochi was our real destination, a proper traveller hub with lots of colonial buildings and tourist activities. At first we were taken to home stay (a room in somebody’s house), but chose a hotel near the centre instead. Our two days there felt like many more from all the activities we packed in. Our first day we toured the city and saw a traditional dance performance which took us a while to figure out that there was a story they were acting out. Then the next day we got up early to visit elephants taking their morning bath, followed by a backwater boat ride visiting spice farms and ladies weaving coconut rope and then learned to make our own meals in a cooking class!

Kerala definitely felt like a whole new India to us, with so much fresh air, less traffic and no slums! I was told that they did not have slums but didn’t really believe it until I actually couldn’t spot any myself. Kerala is the most progressive state of India, having the highest human development index and literacy rate. It also has lots of jobs and all children go to thanks to the communist government! The have been under communist rule for 50 years and it has apparently paid off, since not once did someone beg us for change. Even taxi drivers have to be educated up to the tenth grade, which might explain why they don’t honk every five seconds! It was a refreshing new experience to Indian culture and flavour, making it hard for me to understand why everyone wants to move to Mumbai instead of this beautiful coastal state full of jobs, elephants and coconuts!