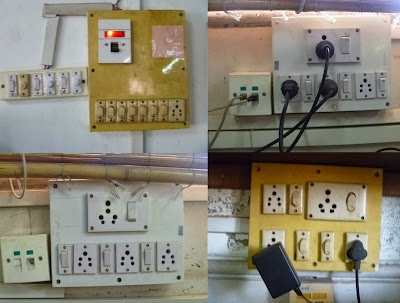 In the house I grew up in, I would say there was an average of one light switch per bedroom and two for common rooms like the kitchen or living spaces. In India this is multiplied by at least 5. Even in the slum homes that I visit for work, which consist of a single room of less than 100 square feet, there are more electrical switches than my entire house back in Canada. You would think that the smaller the space, the less lighting and electricity it would need, yet in India it seems this is the opposite.
Our apartment in Mumbai has 5 separate lighting options for the living room, none of which are a lamp (my bedroom has 6, including a light in the vent)! Then there are also switches for the multiple fans in every room, the air conditioners if you are lucky enough to have one and then for the electrical outlets – which is incredibly bothersome when someone accidentally turns off the refrigerator switch! Here is an example of what I mean:

Many of these switches we have no idea what they are for or why we would need them, like when was the last time I shut the doorbell off? I suppose there are more switches here since people want to control the electricity usage, since they make sure all the outlets are off when nothing is plugged in. However I am still amazed at the multiple switches to be found around every corner and their random uses!