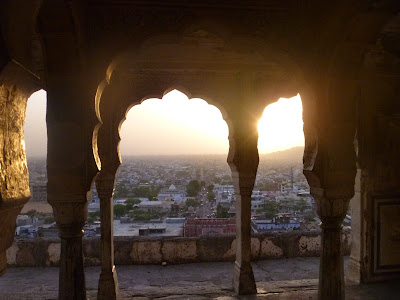 This is the real India, where many traditions are still in place, if only for tourism purposes. We chose to visit Mount Abu because of the summer festival happening in this oasis of a town isolated on top of a mountain surrounded by the barren desert landscape. After an hours ride up the steep hills, dodging monkeys, our first mission upon arrival was finding accommodations. The hotel we had in mind was nowhere in sight and many of the others were booked, so when this little boy with the face of an old man gave us a good deal we took it. Our room was pretty cheap especially for this tourist town, but was spacious and breezy. It was only after moving in that we realized the third bed consisted of a blanket on the floor and the washroom was a hole in the floor with a tap and a bucket.

Going back to our room that evening we had a couple visitors, a couple dozen cockroaches! First they came out one at a time and my screams were quiet and brief, but when I started waking up the whole neighborhood, the hotel owner had to come with reinforcements to control the situation. My friends were doing most of the killing while the others pushed the bugs down onto the street and I ran in circles avoiding the disgusting creatures. They killed about 30 of them and Benja was still swatting them in his sleep! 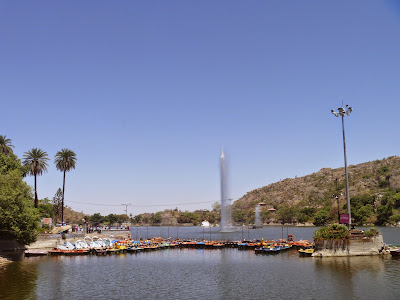 Mount Abu was actually quite small and full of Indian tourists, so there were lots of activities and a fantastic evening show. We saw the sights and had our first Rajasthani Thali, the authentic meal of lots of little dishes before seeing the show. There were traditional dancers in fantastically colourful and mirrored costumes with knives in their mouths and peacock feathers, even the governess of Rajasthan came to see the performances!
The following day we went to participate in the festival’s competitions, where they welcome and even favour foreigners. As we were looking around, I was pulled over to sit on a bench and handed a tube of henna where I was told that I was in a competition and had half an hour to doodle on myself! Turns out I am a professional henna artist (or at least they think so) since I placed first and got my photo in the newspaper holding my prize of a souvenir plaque! (See for yourself in their local newspaper, don’t forget to translate for the funny headline!) For our next event, they also tried to rig the outcome by giving us the fastest boat, but an Indian couple stole it on us and won…. We came fourth after paddling as hard as we could! 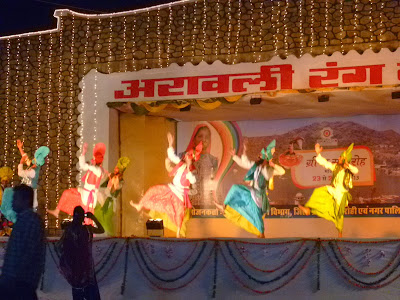 We went for a wander up the a view point in the afternoon and started playing cards when this old man in a turban and traditional clothes was breathing down our necks watching. He just wanted to play, but didn’t know crazy eights so he taught us rummy instead using his few words of English and our few words of Hindi.
Our next stop was Jaipur, one part of India’s golden triangle, a must on the tourist route which didn’t disappoint. It is known as the pink city since all the buildings of the old town are all coloured pink (actually more of a peachy orange) and was home of the maharajas (royalty) of the princely state. There were lots of palaces and temples and even an astrological park to visit in this 40 plus weather! Our hotel owner (a considerable upgrade from our previous accommodations) arranged a rickshaw driver to take us around to the sights further out of the city for the day. These included an old fort, camel rides, a minaret look out, textile warehouses and a monkey temple, where he knew all the best spots to take photos and the most ridiculous poses to go with!
All of these places were really interesting since we did not know much about the history of India during this time period or location. It’s a little too bad that it was so hot since most of the time we were too exhausted to comprehend what the guide was saying or to walk to the other side. The monkey temple was actually really fun since it is now home to some 5000 monkeys and its down in a little valley that makes you feel like Indiana Jones when you are walking towards it. The monkeys were really approachable especially since we had some peanuts and one even tried to take my tarot cards until a kid hit him away! 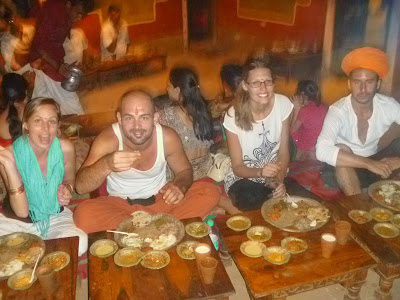 After getting to know Mumbai, I can really see the differences between other Indian cities and Jaipur definitely has its own character.  Just from the ratio of animals to vehicles on the road, and the variety of both was a huge difference to Mumbai (camels and bicycles were much more common). Being a desert state it was much dustier and thankfully less humid than Mumbai, but it was still so intense that I was drinking about 4 litres of water alone every day, and sweating so much that I barely ever had to pee! The clothing and food was also very distinct to the region, which we got to experience in a typical village inspired restaurant/theme park. Sitting on the floor and eating with our hands we were given endless leaf-bowls of colourful slop that burnt my mouth off, but it was so delicious I had to keep eating. The grounds also hosted puppet shows, traditional dancing and circus acts as well as camel and elephant rides. After dinner we just wandered about and played some shooting games, got some free henna artwork and I even got my palm read – turns out I like to travel and am going to live past 75! (the rest is for me to know and you to read about on here!)

Being in Rajasthan felt like we went back in time, especially since everybody dresses like Disney’s Aladdin movie with  turbans and baggy pants and has a monkey friend and it actually makes Mumbai feel international and modern! crazy eh?!