Our second trip out of Mumbai might as well been an experience in Indian transport, since we took every possible means to get around. We started with the overnight train, which was probably the most comfortable accommodation during our entire trip. We were a little nervous about all the things people have told us about the trains so we booked a higher class, with real beds and even air conditioning! The only thing was that we didn’t know if we would be allowed on. They oversell the tickets here to fill any last minute cancelations, so when we booked we were waitlisted. Two of our seats were confirmed a week ahead but we started to get nervous when one of us might have to stay behind…. It wasn’t until 3 hours prior to departure that we found out we would all be going – yay! 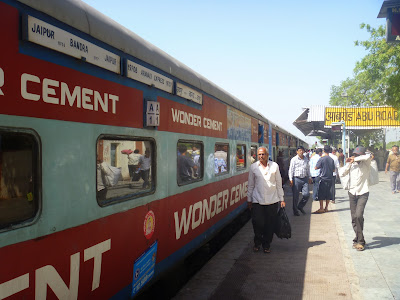 We then took a taxi up the mountain to Mt. Abu, who sped all over the road on the tight turns. It wasn’t bad going up, but coming back down the bus was full so we opted for a shared taxi. This was similar to an SUV, with two benches (seats for 6 people and the open trunk) yet our taxi driver managed to cram 14 people inside! Especially with everyone’s luggage, it got pretty tight as we rounded the corners staring down the cliff. This was my first experience with carsickness, so I was all too happy to get out after the hour ride.
We thought he dropped us off at the location of our next mode of transportation, the overnight bus. However after asking everyone around, it was 7kms back towards where we had come from. Good thing we left early, since as we finally found the pick-up point, a bus headed to Jaipur was right behind us. In hind sight I think that could have been our bus, but since they have no idea who is meant to get on, we didn’t chance it and luckily another one came in half an hour. We got on this one, even though the company name and timing didn’t match our tickets! 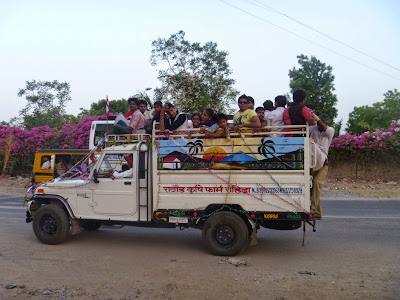 The bus was not as peaceful as we had hoped. We did have beds, a single and a double above the seats below, but without air conditioning or proper shocks it was a sweaty and bumpy ride. I did manage to get some sleep over the 10 hours, although I had a dream my mom picked me up in her old blue car (that she will never get rid of) and it had lost some engine parts so it was really bumpy and then her brakes went and we had to do donuts in a parking lot to stop. This was pretty much an unconscious reincarnation of the experience. The worst part was that the bus didn’t have a toilet (at least the train had one, even if it was just a hole in the floor) it had to make multiple stops throughout the night, so if you were awake you had the pleasure of peeing in the dark behind a shack in the middle of nowhere. The driver was nice and pointed me where to go and waited for me when everyone else had already gotten on! 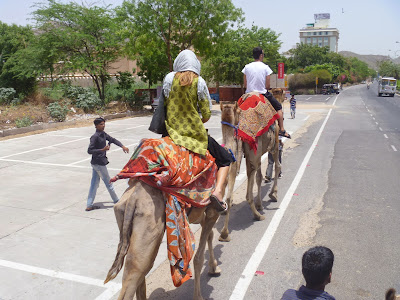 Among the other modes traveled during this trip included, boats for leisure (paddle boat races), inflatable bubbles to walk on water, camels, rickshaws as usual, unfortunately we couldn’t take the bicycle rickshaw since he couldn’t haul three of us, and then we flew home on an airplane. Overall I am quite impressed with the transportation systems available, paying a dollar more for air conditioning or a bed is certainly worth it, and in the end I think the road conditions were to blame for most of the discomfort.
After finally experiencing India’s travel options, it really brings to light what terrible conditions I endured while traveling on my own around China. In comparison to the further east, this was a breeze. It is funny to reflect on my Chinese experience now, since in order to get through it I had to keep telling myself “just imagine if you were in India!”