…The Korean peninsula to be exact. I thought it would be best to ease myself into the asian culture by visiting a friend who can show me around and introduce me to some of the customs, sayings and food! My friend Kiel is working outside Seoul in South Korea as an english teacher for the year. I never saw him living in asia, mostly because of the funny impressions he did of asians that he served at his last job! haha, but he is loving it! Which is great for me to arrive in a positive atmosphere and find out about his experiences, even if he isnt the best tour guide!
I had never really thought about what Korea would be like…. having barely any knowledge of its history or culture. However I was pleasantly surprised at how welcoming they are to foreigners, especially considering all the ignorant english teachers that arrive here! I was also impressed by how modern and advanced Seoul was in particular. For some reason I had equated Korea more with China than Japan, as it seems to be. Their metro system is very efficient and complex, yet easy to use, while the streets are grand and lined with trees and skyscrapers. I am told korean is quite easy to learn if you make the effort, but with just a few words and hand signals, I got quite far! There is even a free bus service between major cities for international passport holders.
I took advantage of this and spent a night in Gyeong-Ju, an hour north of Busan, and the bus was only half full! The journey was well worth it and very scenic along the way with rolling green hills on either side slightly covered in mist. I chose Gyeong-Ju not only because it is small enough to see in a day or two, but because of its historical significance and rural landscape. This city was the capital of the ancient kingdom of Silla,  from year 0 to 900, that was one of the longest running dynasties in Asia (I had lots of time to read up on the history on the 5 hour journey!) So the mountains that surround Gyeong-Ju are littered with ancient relics, tombs and temples; which made for some great sightseeing while hiking!
Back in Seoul, Kiel was a great host when it came to nightlife! Most of the time we stayed in Incheon, where he lives and is quite lively with a big english teacher population. However when we did venture into Seoul, whether for partying or shopping we didnt return until 8am, as we continued until the metro opened again! This isnt as hard as it sounds since most places are open noon-2am as a bar then 2am-noon as a club! And the shopping malls dont close until 6am, so there is lots to do at all hours of the night…. Kiel also entered us in a beer pong tournament – which we were late and disqualified! – and got tickets to DJ fest that runs all wknd non stop!
It was great to meet up with him again as well as a few other people from Trenton that are also teaching over there and I havent seen in forever! Everyone seems to love it! I think that living and working abroad is the best way to experience different countries, rather than bouncing around quickly as I am, and forgetting what I have just learned about my previous destination. During my travels, I hope to come across some volunteer or work oppurtunities along the way so that I can soak up as much culture and crazy experiences as possible!
Looking back now, Korea was very inviting, beautiful and much more western than I expected. My favorite part was the hiking. I took Kiel and his friends to Bukhansan Park just north of Seoul to a spectacular hike that gave 360 views at the top, but also quite scary! My least favorite thing would be the crazy food that kiel kept ordering for me “forgetting” that they were full of eyeballs and tenticles!
So if I am desperate to continue traveling after I run out of money, I would definitely consider returning to Korea for a month or two teaching english! 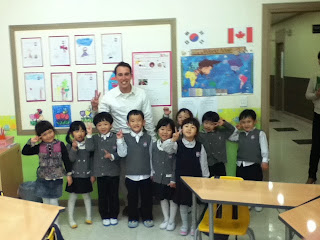