So I have left Canada once again, this time I am heading West in hopes of getting to Europe via Asia!

My first stop is Hawaii. Ahhh paradise! I never saw myself going here because I thought it was too american and a place that only the weathly can enjoy, but turns out it is easy to backpack and has lots of cultural interests as well as being one of the most beautiful places I have ever been.

I traveled here with my boyfriend Shane for the month of April before he had to go back to his job in Calgary. We flew into Honolulu and stayed in Waikiki beach for the first few nights. I was shocked at how much of a city was there and that not everybody lived on the beach! Our first day we were so excited for the beach, we tried to stay out all day without any sunscreen, and came back as lobsters and peeled for the next week! Lesson learned and we never went anywhere without lathering up first.

After staying a few days we flew to Maui to stay with a friend of Shane’s family for a week in Kihei, where the beaches were even more gorgeous, if you can believe it. This part of our trip was the luxurious experience, when Shane golfed every other day and I laid on the beach or pool reading and swimming…. Pete who we were staying with took us to some of the best restaurants for dinner that overlooked the ocean. He also took us to visit a friend of his that has an organic farm in the mountains, they grew mostly bananas and lilikois, and gave us handfuls of jams and juices. It was intersting to see how bananas were grown, and they gave us the whole tour, including thier home they just built using enormous logs brought from Alberta!

Pete also let us use his car to explore the island, which is just as it looks on all the postcards! Haleakala is the dormant volcano and the drive around it is amazingly twisted and scenic. The hikes all over maui are breathtaking as well, one took us through what looked like jurassic park, walking along the never-ending ridge of the mountain. Our days in maui ended with Pete getting a hole in one on the golf course, so of course we had to celebrate: luau, leis and maui wowee!! This made our trip back to Oahu’s north shore incredibly long the next day….

The North Shore has got to be my favorite place we visited. It was much more remote and relaxing than the cities and the hostel we stayed at was right across the road from the ocean and an amazing snorkel spot! Now I had never snorkelled before and growing up pools always made me afraid of swimming in open water with fish and seaweeds, let alone the possibility of sharks! so i was freaking out the entire first day, only up to my knees in water, panicking and scared of the little minnows… but i got used to swallowing salt water and swimming with all the colourful fish that soon enough i was going twice a day! I even saw an eel! i don’t know if he was electric.

Our hostel had a few stray cats as all other places in Hawaii, and one of them had kittens! however the mother abandoned three, one of which survived. A bunch of us staying there tried to help him stay alive, but he was brand new, with his eyes closed still, he didn’t even look like a cat and it wouldn’t stop crying for two days! We got him some goats milk and fed him through a syringe. Shane was the only one who could get him to eat, but everyone helped out, and eventually we found him a home on Craigslist since the humane society wouldn’t take him. YAY!

The next day we rented a car (really cheap!) and drove all over Oahu visiting every beach we could find, some with enormous waves and others with warmer water and whales too! I tried body boarding a bunch, which is really fun, but I half drowned in each wave! one time i got thrown about and on to shore right next to a giant tortoise! I was scared and ran away, while pulling my bathing suit back on!! surfing was also difficult, especially considering we went where the waves were tiny and you had to swim really far out…. but it was fun to try!

We also visited the west side of Oahu, where Shanes dad hooked us up to stay at a resort for free! This place is where all the hawaiins go for holidays, and was tucked between the mountains. We got to play tennis and explore the less touristy parts of the island, which is still very beautiful. Everyone there was having luaus on the beach and had tons of tents set up with thier entire families for the day, I wanted to join in but we were the only tourists in sight…. here’s a pic! 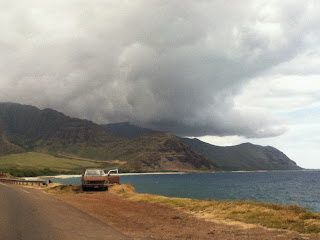 Our last few nights we decided to splurge and stay in a hotel before leaving. It was really nice, overlooking the harbour, and mostly Asian people! that was OK though, we pretended we were important and went out for fancy dinners and spent a few more days on the beach and eating puka dogs!

Overall Hawaii was soooo much more than i expected, not just a resort town. Tons of stuff to see and do that is cheap and stunning! All the locals were very friendly and it didn’t feel like the states at all. I didn’t realize that the hawaiian culture was so alive and that there is actually a language, i had thought it was all island slang! The hawaiian food specialties were good, our puka dog was filled with tropical fruit salsas, but the rest had lots of grease, spam and usually a scoop of rice and macaroni salad on the side of everything – sorta explains their size! but it was all very tasty, the only thing we didn’t try was the loco moco, a hamburger patty with a fried egg, gravy and rice piled high! However the drinks were more what I was interested in. I never had a mai-tai before, but i think i made up for the lack within the month! sooo tasty! So i will definitely be going back, if only for the beaches. It isn’t like anywhere else I have been, although my next stop will be an entirely new experience also! Aloha!