My three months in India have flown by, and as it comes to an end I can’t help but notice the many subtleties of Indian customs that I have picked up – or been made fun of by my friends! I didn’t realize it was happening, but I should have known that I am easily influenced by my environment and that living here long enough would turn me into a full blown Indian. 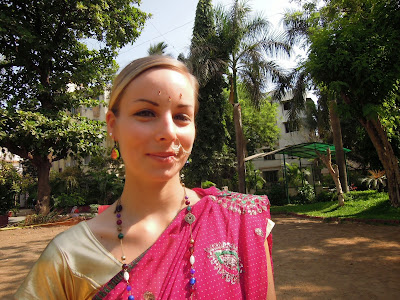 It started slowly, first by eating the food and gradually using my fingers, then replacing my jeans with comfy pyjama pants (and then I saw how nice they look with the kurti)– only to make due in the humid weather of course! After a month or so I caught myself doing the head bobble, still without knowing what it means. I was walking across the street with ease as a three wheeled vehicle just barely missed running over my toes. And then it happened, the action that confirmed my Indian transformation was nearly complete – I littered.
Not because I wanted to, and not technically throwing garbage freely, but I tossed an empty plastic bottle that I had been carrying around for hours looking for a bin. I chucked it with force into a “designated” garbage pile. These are common enough corners that people decide to throw trash assuming someone will sweep it up, and they usually do, so when I couldn’t beat ‘em, I joined em’. It didn’t feel right and I haven’t done it since, but it happened so unconsciously that I stopped and looked up at my friend and laughed that she noticed too – I was Indian.

So its probably a good thing that I am saying farewell to this place before it gets the best of me. There are many things that I will miss, including the comfy clothes and butter naan, but I have learned so much here that this experience will be hard to forget. I have been so interested and curious with the culture and the different way things work here that sometimes I forget how much I am absorbing it. One day the monsoon rains started to wet the pages of my book, I looked up from the backseat of my taxi and relished in the fact that somehow I was reading amid honking traffic and torrential rains on my way to work, never did I think that was possible upon arriving!

The other thing that I never expected to grow fond of yet have finally figured out is the squatter toilet. After spending many days staring at and drawing these things in the worst possible condition, I thought I would be begging for familiarity. But after finally figuring out the proper foot angle and balancing technique (so I don’t have to hang onto the doors for support), they are so much better than the western toilet – provided you bring your own t.p!

So now that I am back in Europe, I feel at home once again and can finally see how crazy it was there. Considering the last week I had I was about ready to go home (minus the enormous research I still have to do). I was incredibly ill for 24 hours and could not even stand up properly the day before my flight, and then one of my three flights was cancelled a couple hours before boarding and I had to reroute all my travels at the last minute. However as I finally stepped off the plane and all the Indians (including myself) dispersed into the Zurich International airport, it suddenly hit me how organized and pleasant it was to be among familiar settings, around people that looked and acted like me. The last of my Indian ways were stripped away at the Zurich airport security, as the officials took all the liquids and sharp objects that Mumbai airport somehow allowed to bring along!

If I had to describe India in one word, it would be “unpredictable” and not only because I am a foreigner, but I think that everyone there doesn’t really have much idea what to expect next. And that is much of the fun of it.