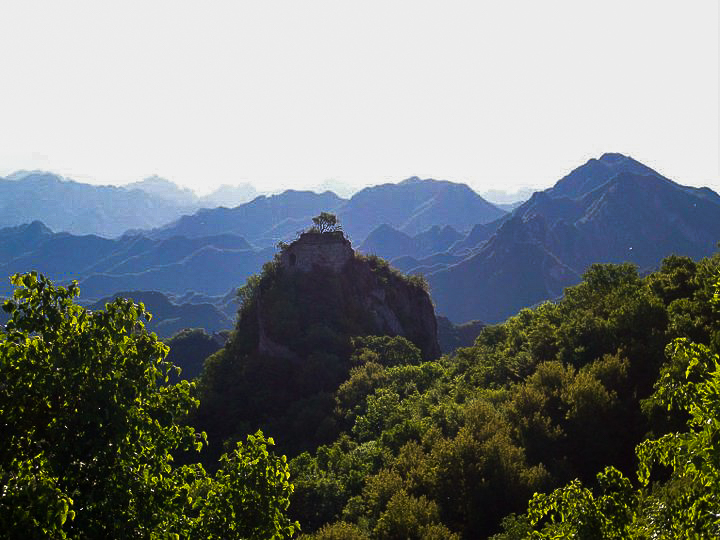 Ancient structures amaze me, and the Great Wall of China is the main reason I wanted to visit China. Its scale and age make it nearly unbelievable, but then its setting and difficulty to build in the terrain make it magnificent.

So when I met some people in Beijing that were going to a remote section of the wall to camp overnight, I had to join them. They were five Americans, two working in Shanghai, and one who could speak mandarin, and without him the trip would not have been possible since we needed local help to get there and find our way. 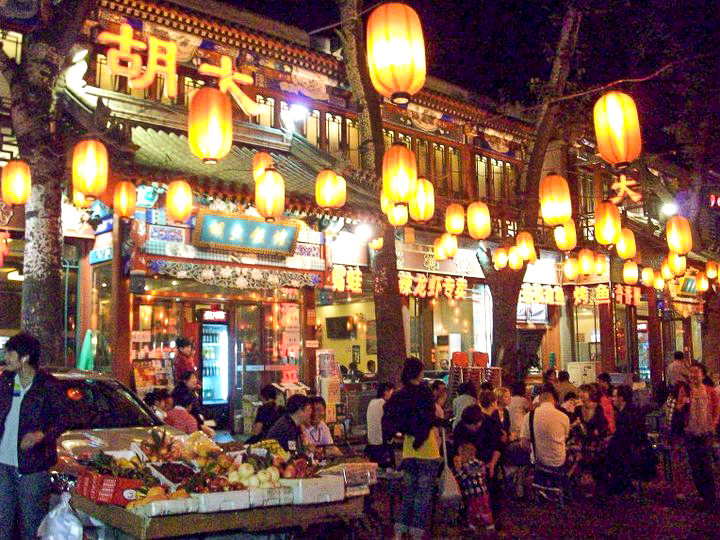 We left the morning after I met them, taking a bus (not the sleeper bus) for an hour and then an illegal taxi van for another hour to the middle of nowhere. The Chinese are crazy drivers even in China (I thought the stereotype didn’t apply in the homeland) and we were dodging other cars and tour buses, passing them as they came around sharp corners and we climbed the hillside. The driver dropped us off at a “hotel” in the middle of nowhere, the most middle of nowhere I have probably ever been. The hotel was our launch point, a corn-covered a shack with two old men and a baby hanging around, who gave us our map… a business card with some lines on the back, perfect. 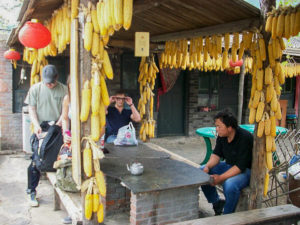 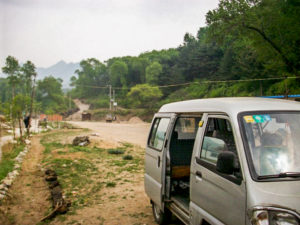 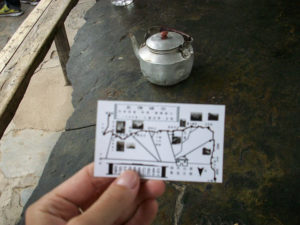 We were now surrounded by the the wall, you could see the mountain ridges in the distance and signs saying that this portion of the wall is closed to the public! Perfect… luckily there is nobody around patrolling the area and the two men were actually helping us get there. We stopped at this shack to rent camping gear before hiking up the mountains. So after buying some overpriced fried rice and some basic supplies, we ended up with what we thought was a tarp and a sleeping mat each…. we would soon find out this was not the case.
Our hike began in farmers fields before getting very steep, very fast in the forest. We were the only people on the mountain and were forging our own trail through the bushes and rocks. It only took about an hour of good paced hiking to get to the top of the first mountain range since we were already at high elevation, but once we climbed on to the wall itself, it felt like we were on the top of the world overlooking the beginning of time! So we celebrated with some local Baijo liqueur shots, we made it! 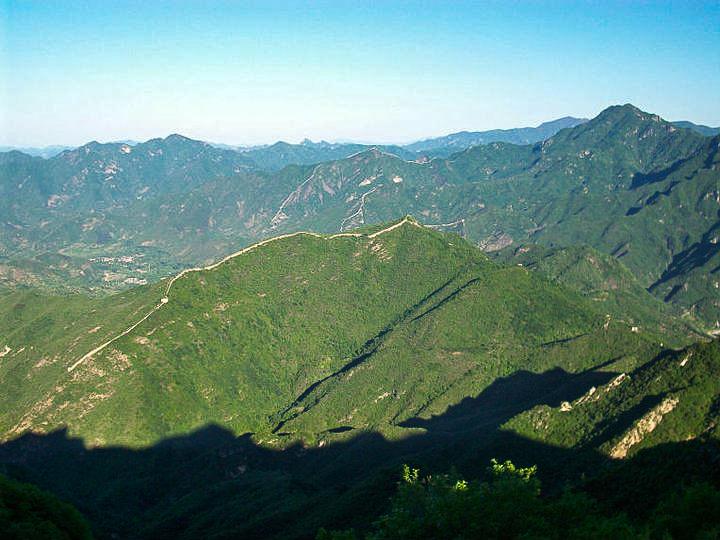 Surrounding us were endless mountains ridges all laced with the great wall at the highest and steepest points. A mist hung over the valley areas so you could not see any of the small villages below, only the mountain peaks, clouds and the wall. It was absolutely breathtaking! The wall was in its original state, patched in places over time but not reconstructed as in the tourist allowed areas… some parts were quite dangerous and dropped 30-40 feet down the hillside. We hiked along the wall until we found a sheltered watch tower on a peak that offered some protection from the elements for the evening. We dropped out bags there and continued exploring.

The wall was not as wide as I had imagined, at least in this portion, but its construction was beautiful. It is really more of a walled street, with huge stone blocks for the first 15 feet then interlocking stones rolling parallel to the terrain, dotted with small holes for guns in the walls. It was overgrown with plants and lilacs which really made it feel like it belonged there and will forever be part of the landscape. Some portions were so steep, so high and so undulating, dropping off on both sides that I was scared climbing it on all fours; its hard to imagine how anyone ever built this, especially so long ago with simple tools and manpower. This only adds to is spectacularity – if that’s even a word! 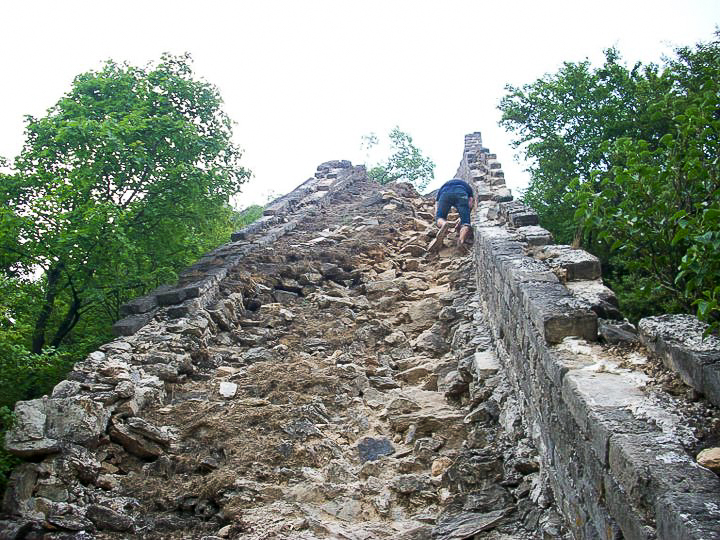 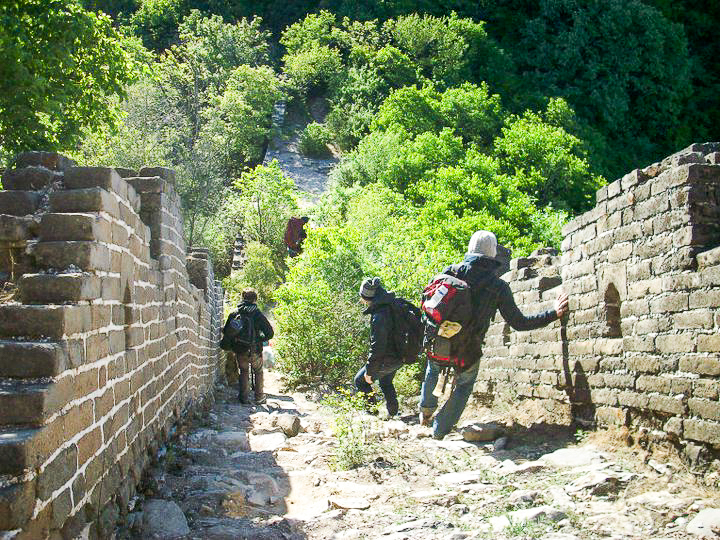 After getting over the awe of the place we gathered some wood and started a fire before dark, yes we lit a fire on the great wall, don’t tell anyone! It turned out to be a lot colder and windier than anyone expected or prepared for and our tarp turned out to be a two person tent without any poles, so we just used it as a blanket, which didn’t do much. Turns out we only had three sleeping pads too, so we did the best we could finding a sheltered corner of the watch tower. So after a day of hiking and exploring, we huddled around the fire and kept watch for mongols, just like the guards used to do!

I was only in a hoodie and had some of the tent to keep protected, I wanted to ask one of the others to cuddle, but we really had just met the previous evening, so even though we were all shivering, we just dealt with it and waited for the sun to rise.  I don’t think any of us slept that night and we were all glad to see the sun and feel its warmth at 4:30 in the morning. Since our pick up wasn’t until 10am we built another fire to stay warm and admired the sunrise over the endless mountains and ruins. It was much clearer than the day before, all the little villages below were now visible and the wall went on following the mountain ridges as far as the eye could see!

We hiked back down and without seeing another person besides our taxi driver, got back to Beijing for a nap and my great wall experience was over 🙁

I want to go back already!