I decided that with only one month left and having my upcoming weekends booked, that there was no better time than now to visit the modern architecture of the historical town of Ahmedabad, Gujarat. Having only one day off I took an overnight bus to arrive Sunday morning and after seeing the sights, caught an overnight bus that evening to get to work on time Monday morning. It was an exhaustingly inspiring day. 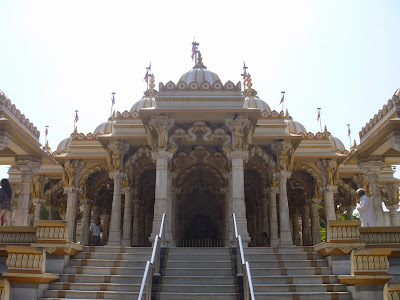 This last minute trip also gave me more to complain about the bus transportation. I didn’t mind the lack of sleep from flying off me bed every 5 minutes during the night, so much as being two hours late for my already time constrained day. This caused me to miss the historical tour I planned on attending at 7.30am. Luckily my architect co-worker who studied in this city provided me with a detailed map of the sites of architectural interest around the city, I had 40 sites to visit in 9 hours in 45 degree weather!
Unfortunately the detailed map wasn’t detailed enough to provide addresses and many of the names printed blurry or illegible, so I just chose names at random to tell the rickshaw driver until he recognized one. I started with the old stuff, 600-400 years old of mosques, temples and I don’t know what some were. It felt like being on amazing race and trying to find clues to the endpoint, as some buildings had been left abandoned or covered by shops and vendors. One tomb was actually behind a jewellery shop being used for scooter parking. The old city was really interesting though, it felt like a Middle Eastern bazaar full of animals, shiny things and colourful foods, not forgetting the people who always want to help us find our way even though I am pretty sure they can’t read a map. 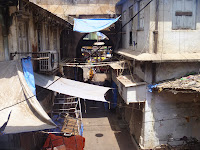 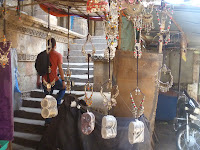 A couple structures were closed or destroyed, and one unassuming temple even had people and peacocks inhabiting it. We thought we might as well get a closer look at this dirty little thing before leaving and then realized that it extended underground and further another 100 meters! It was sort of an inverse version of a temple that looked like it had some optical illusion form the repetition of motifs I half expected it to be booby trapped among the bats and endless stair cases.

After not having much luck locating the historical buildings, we switched time periods to mid-20th century modern architecture, of which Ahmedabad actually has lots to offer! Le Corbusier, Louis Kahn and their Indian equivalent B. V. Doshi have all built structures in this city. It was really interesting visiting these modernist designs in person, especially in such a different context, seeing how they have survived in comparison to ordinary Indian structures. Of the ones we were able to find (since architecture designed homes are not registered on rickshaw driver’s city information guide) we came across one of Corbusier’s buildings that is now used for a museum and has physical models and explanations  of all the other architectural works of the city on display. I was glad to come across this since I was beginning to realize I might not be able to visit all 40 locations on my list! 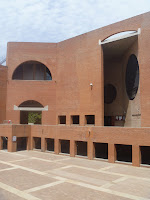 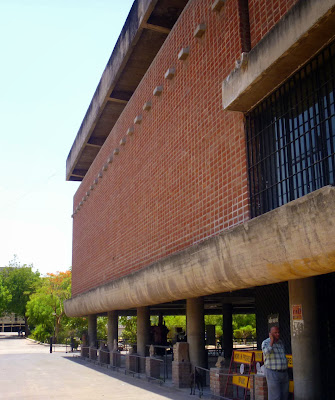 One of the most interesting places we got to see was Doshi’s self-designed studio that integrated nature, geometry and a variety of other architect’s influences, including Kahn, Gaudi, Corbusier and Frank Lloyd Wright. It was actually closed being Sunday, but the security guard let us walk around the grounds, unlike the security guards at the Institute of Management who I nearly had to fight in order to let us in! It was a successful day after all, but I was certainly drained by the end of it and only made it to a quarter of my intended sights. Nevertheless it was a jam packed architectural refresher  of a day that I never expected to come across in India! 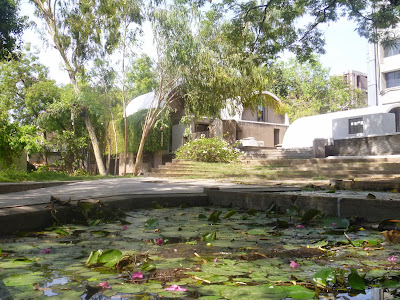