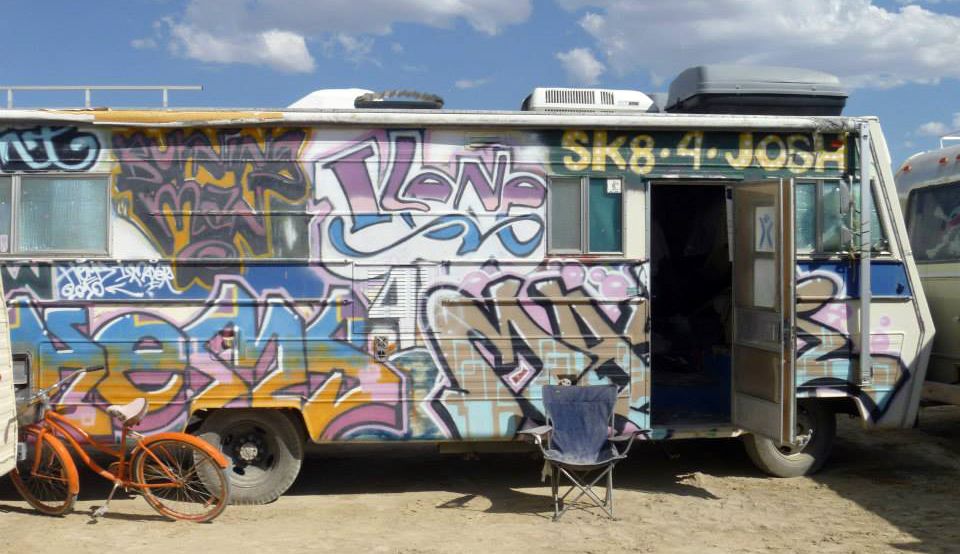 For a couple weeks this August I tied some knots that helped build the host city of Burning Man 2014. Deciding to join two days before arriving, everything was very last minute and thrown together as haphazardly as most of my best decisions, and ultimately left me wanting more after experiencing such a rare combination of creativity, nature and chaos.

I thought I understood what it would be like to help build Black Rock City after attending an on site volunteer weekend in the desert, and  by hearing endless stories from my friend who has been working there for years. I get the concept of radical self expression and the remote desert landscape – as wild and extreme as they both are – but what I didn’t expect is openness and diversity of the people I found there.

To become part of the event construction crew, my tasks over the following two days were A) find a tent to live in for the next month, and B) find a ride to the middle of nowhere. The latter task being quite difficult since I don’t have a car and public transit does not go to the desert. Oh yeah, and I also had to tell my work and landlord that I would be leaving immediately. Somehow I got it all together in time and completed some final job applications at 4am before waking at 6am to catch a bus to Oakland where I was picked up by three strangers – a girl with half shaved pink hair, a guy with green/blue/purple hair, wearing a dog collar and 7 knives, and the cutest dog ever.

I was a little nervous about my rash decision upon arriving to the town/intersection of Gerlach to a saloon full of drunken tattooed pirates, with the words of my coworker playing on repeat in my head “what is your comfort level with drugs?”. I don’t remember what I was wearing but it certainly wasn’t black like everyone else and my hair seemed to be the only natural colour that completely covered my head that wasn’t in dread locks… I think I stood out a bit.

Comfortingly, I soon learned that I was not the only person that had never attended the event before and after a welcome meeting where people declared their sobriety and respect for each other it was much less intimidating, and after a few drinks I was fascinated by the hodge podge crew. I met other architects, and builders but also musicians, street performers, trailer trash (admittedly), pilots, unemployed, anthropologists, potheads, tour guides, graffiti artists, ski instructors and more.

People also found my story entertaining, building an event that I had never attended, having no idea what the results of my labour would be. One person commented that if I continue this trend of throwing myself into situations as insane as this one, they would love to read my autobiography someday… if they only knew! Others would try to describe to me what this all stood for or prepare me somehow for the thing that “would change my life” but mostly people described the organization that runs Burning Man as a summer camp for socially awkward workaholics… and they weren’t too far off.

I think it is the conditions of the work that make the camaraderie so entertaining. Everyone wakes up hungover at 6am from their tent or truck, works outside all day in the scorching desert and then goes to the complimentary bar to get drunk and do it all over again the next day for minimal pay, if any. It seems everyone is on their last ounce of energy and down the core of their character so they just say and do whatever it takes to enjoy themselves while gettin’er done, in the so called sustainable jackassery format.

My job in this band of hooligans was to float between crews wherever they needed extra hands. It was pretty cool being able to see a few different jobs and how different crews functioned. Some had no idea what was going on and did things three times before getting it right, while other teams ran like a well oiled machine. For two days I helped to assemble a huge circus tent where nobody had any instructions or experience. After holding my tongue while watching them eyeball where to drop huge steel columns, I wasn’t sure if I would ever be able to enter the finished building knowing how it was constructed. Yet somehow it all worked out, seemingly to be the nature of everything out there in the desert.

One crew tried to adopt me permanently, they were very diverse hailing from the nearest town (100 miles away) to across the country and Europe. After seeing my knot tying skills (which I owe to girl guides if they actually exist), the crew did not want me to leave and started calling me Clove Hitch since I seemed to pick it up quicker than the rest – although I am not sure this is entirely true since I think they just wanted more girls on the team!

We tied knots to build the fences for the event, which also consisted of stringing flags to posts. I thought this sounded easy, but it turned out I had to RUN behind a truck in the desert, which felt entirely insane to do in that heat. I wanted to walk but since a man in his sixties was able to do it, I had to keep up – it was only later that I realized he is an ex army officer as he outdid us all in push-ups too!

One of my favourite crew members is the oldest in the clan, he grew up in the area and talks about buckarooing and other cowboy talk that I don’t understand since he is the real deal. The things that come out of his mouth are like another hilarious language, one of my favourite being “lets make like horse shit and hit the road” which he says in all seriousness.

The three months prior to arriving in the desert was the first time in my life I started to shower everyday, but moving to a dried up river bed stopped that trend pretty quickly. After a day in the sand and wind I had one rat’s nest of hair attached to my head and no outlook of a shower for days… back to my natural state! Personal cleanliness wasn’t very popular there but environmental maintenance was huge. In order for the festival to take place every year, there can’t be any trace left, all the electrical wires are dug up again and every last bit of waste is picked up before the final inspection after the event.

The trash crew helps keep the site clean and sorts all of the waste in huge dumpsters to be removed, but before they filled them up this year, they thought it would be fun to party in the bins first! They hosted a trash party where we got in the dumpsters and one was set up as a smashing corner, with people take turns breaking glass bottles – they will be broken during the recycling process anyways!

After participating in some awesome events, while working hard, eating well and drinking as much as I wanted, I realized that I didn’t want to leave. I forgot how much I enjoy working outside and roaming free in the middle of nowhere and the camaraderie among the lifers and the newbies was pretty enjoyable too – especially when it was someones birthday, the happy birthday song is mutated into pirate babbling where everyone grumbles and shouts random words making no sense or reference to a birthday whatsoever.

Overall this was a lot of fun and I wish I could have stayed to experience the event, but unfortunately I got a job in my field and had to leave early. Although experiencing only a glimpse of a crazy event, it has definitely left its impressions on me and I am going to try my hardest to attend next year! And although this experience wasn’t life changing, (I guess I have to go to the event for that), it was definitely life appreciating. After getting hearing everyone’s amazing journeys it made me so grateful to have had such a fortunate life and supportive family, and realize how lucky I am to have gotten to meet such an array of fascinating, hard-working and creative people!