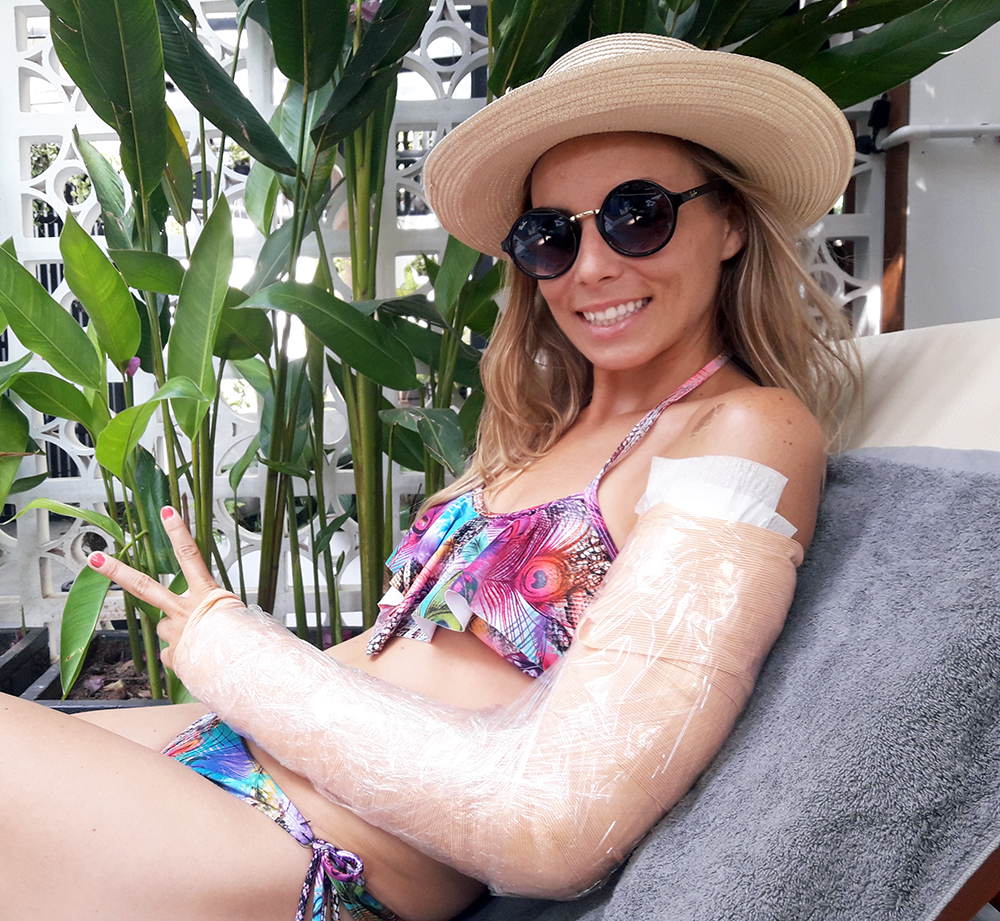 What would be the worst thing to happen when you are traveling in a developing country? Going to jail maybe? How about needing surgery? Nobody plans on getting injured, and especially when your on holiday the last thing you want is to end up in the hospital. Unfortunately it does happen and probably more often in dangerous places that have limited healthcare. I was lucky enough to have health insurance but I was still a little nervous having my first major surgery in a developing country. Fortunately I found that there were actually some advantages to recovering in Cambodia.

I was in Siem Reap, Cambodia for a yoga retreat and went for lunch on my bicycle. I am used to driving in the Cambodian traffic so I didn’t mind biking around the small town, but today was different. It was Khmer New Year and the main celebrations were also happening in the town center. There was way more traffic than usual and everyone was drinking and partying all day. As I leisurely biked home, the traffic went very slow and a motorbike hit my handlebars lightly as he passed me on the right. I lost balance and fell to the left, into an onward coming SUV. He was driving at a snail’s pace and as I put out my arm to brace my fall, I just slid down the side of the vehicle as all the traffic went by.

I don’t really remember being on the ground, I think I was just sitting there, trying to use my left arm to get up, but it wasn’t working. As I finally looked at it, immediately I realized something was wrong as there was a large protrusion pushing against my skin and I couldn’t control anything below my shoulder. At this point the traffic was gone and some tourists came to my aid in the middle of the street. I scooped up my arm with my right hand and they helped me walk to the side of the road and sat me on a chair. A Cambodian lady came and rubbed tiger balm on me as I started to go into shock and made sure I stayed awake.

Getting to a Cambodian Hospital

Since I was on my own, I realized I had to get myself to safety and asked the crowd around me to bring me to an international hospital. I wasn’t sure if there was one in town but had seen enough of Cambodia to know that I didn’t want to go to a local clinic. Many times when a child breaks a bone, they amputate it. I didn’t know what was wrong with my arm yet, I was hoping I just dislocated my shoulder but knew that I wanted some strong drugs for however they were going to fix it.

Two German girls helped me get a tuktuk to the hospital (somehow my bike got back to the yoga retreat) and it was the bumpiest and longest tuktuk ride I have ever taken. The hospital was at the edge of town, but the road there is full of potholes so I could feel the jagged bones bumping together inside as we went. I was so grateful to have some people to talk to on the way, I knew I had to keep talking and take my mind off of the injury so I started telling them about Mimi. I realized that I had a good friend also in town at the same time traveling with her sister, so they helped me call her and she came to meet me at the hospital.

Arriving at the hospital and getting out of the tuktuk was the hardest part. I went in for x-rays and pain killers and found out that my humerus (upper arm bone) was snapped in half and I needed a steel plate to screw it back together. Luckily I had insurance and my friend there to help me figure it all out as I lay awkwardly in the bed waiting for my lunch to digest. Surprisingly, I was not in a lot of pain, only if the bones rubbed together could I feel it, so as long as I didn’t move it was fine. It’s just too bad that I didn’t bother getting comfortable the moment I hit the bed, so was awkwardly twisted on my side for 8 hours. 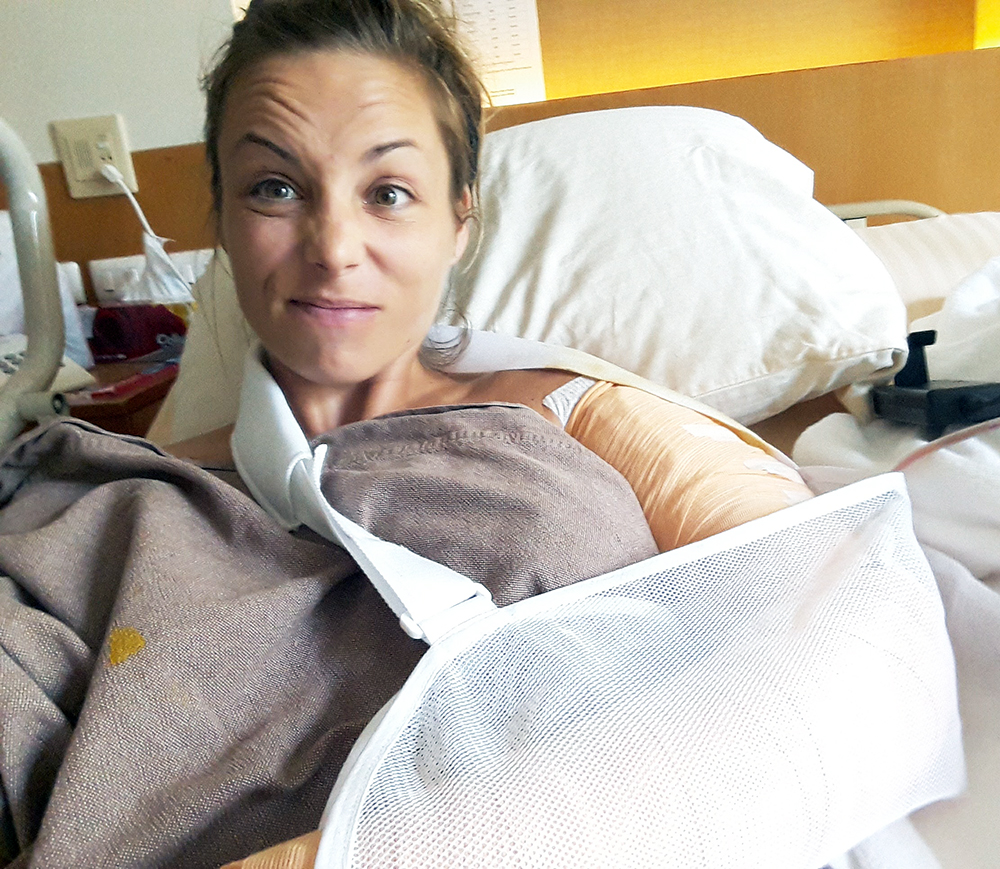 My doctor was actually from Thailand and spoke perfect English so that reassured me. Also, the international hospital had just opened, so I was one of only three patients in the huge hospital that night. Everything was brand new and I had a whole room to myself with a balcony and a view to the jungle… almost better than where I was staying! Too bad I had to stay in the bed for the whole time.

Recovering in a developing country

The surgery went well and as far as I know there were no complications. However I was in a full arm cast from my should to my wrist for 2 months so couldn’t reach my face, type, wash or do much at all. Even when I used my phone, I had to bring it down to my right side so it looked like I was trying to be sneaky all the time!

After getting back to Phnom Penh, I was all on my own with Mimi, I had to learn how to pick her up with one arm just like everything else. However since services are quite cheap in developing countries, I soon figured out that I could hire people to do things for me that I would never have thought of before. 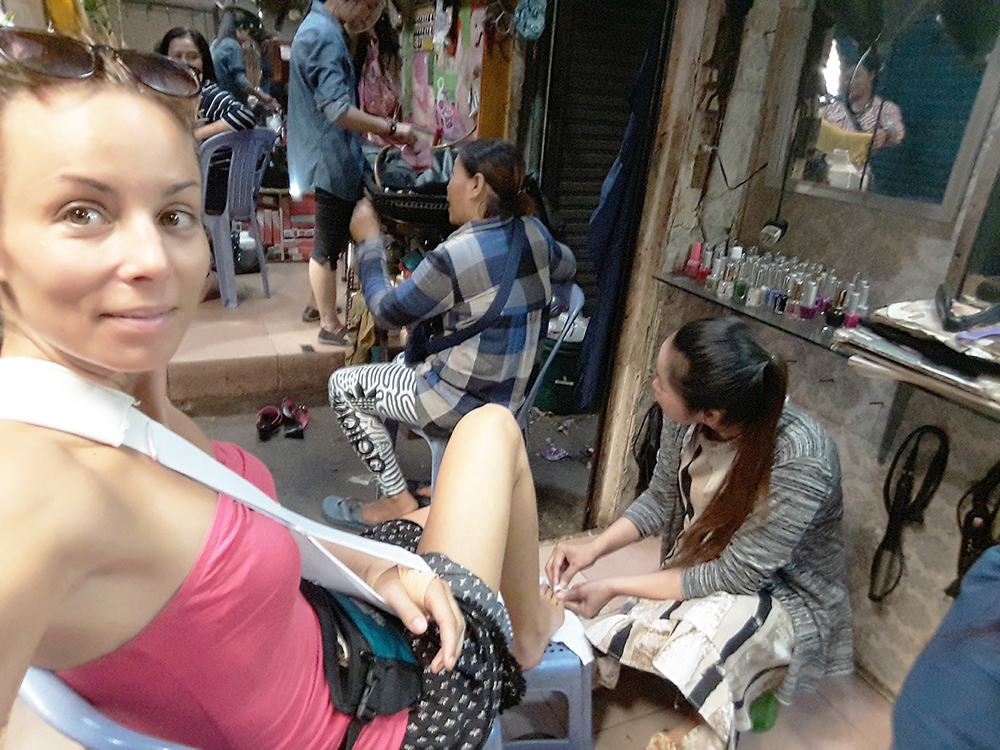 There was a local market right across the street from my house, so every day or two I just walked outside and for $2 I would have a wash and dry in 30 minutes. The only thing was that since I couldn’t really communicate how to style it, I would come out looking like I was going to the prom. Manicure and pedicure was a dollar more, so I had to do it!

I would normally drive my scooter everywhere all day, but its not really recommended with one arm. Now with a full arm cast, I took tuktuks everywhere and used apps to get around which would not have been affordable back home (like taking taxis). There were a few favorite drivers that knew where I had to go so they would wait for me everyday and give special rates. One lady that operates a shop outside my house even drove me to the stationary store and back when I asked her where it was one day, so nice!

There was no way I could do much more than boil water with one arm, but luckily Phnom Penh has a good food delivery system. I would order two meals a day even if they just came from down the street for about $6 and this wasn’t Cambodian food. Due to all the international agencies in Cambodia, Phnom Penh has a great selection of international cuisine, so I can get whatever I want for very reasonable prices – Mexican, Lebanese, pizza, salads, Indian and more! Looks like I’m gonna gain some weight since I am told not to move much over the next few months!

Cleaning ladies come with your apartment in Cambodia, they usually come once or twice a week and clean the whole house including laundry. Well my cleaning lady was very nice and there were a few throughout the building everyday, they knew me since I was usually home and the only girl with a huge cast, so they would often help me carry any paperwork, hold the door, tie up my hair (they like touching blonde hair) and even get dressed if I needed help. Such a relief when I can’t reach my head or toes.

I had to back to the hospital and later to the physiotherapist for check ups and recovery, and even though my insurance didn’t cover this, I was grateful to be in a country where it was affordable. My doctor visits with x-rays, tuktuks and medications were less than $50 and I could go anytime, and my physiotherapist was from Denmark and super cheap. Sort of want to go back for more check ups just because they were actually helpful, unlike when I went for free healthcare in Canada and I had to wait for hours only to be ignored or confused with someone else and pay just as much in parking!

By the end of 2 months I was getting pretty good with doing everything with only my right arm and had made many more Cambodian friends than I would have otherwise. This included the cleaning ladies, drivers, salon ladies, delivery men and just local folks that got used to seeing me around. Actually many Cambodians would stop and ask me what happened when they saw my cast and after I told them “traffic” they would just nod as if they already knew and show me their scars since it is so common in Cambodia. When the cast finally came off, everyone in the neighborhood noticed and made some comment that I could barely understand but I thanked them anyways.

When I saw the stitches for the first time I almost fainted because they were so large I thought I was Frankenstein and started laughing hysterically (I’m not good with injuries). I had to wear a sling for another month but by this point I knew how to get around and function as a one armed bandit. 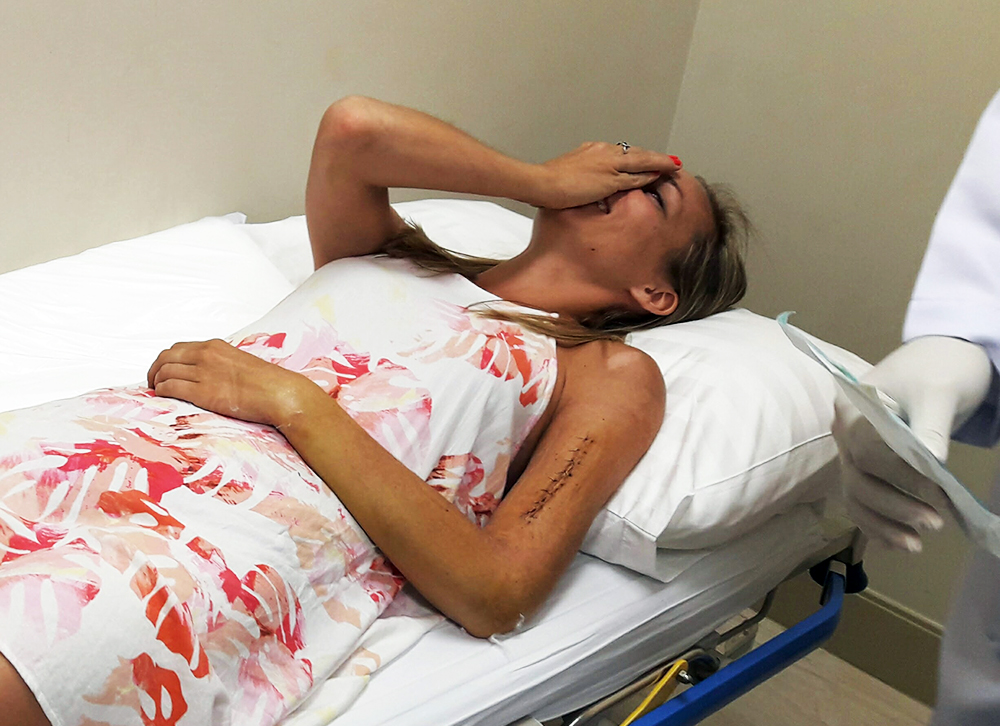 6 months later now and its nearly back to normal, still a little sore and not nearly as strong, but I can ride a bicycle, touch my face and do yoga so thats pretty good for an operation in foreign lands I think! Oh yeah and I have a gnarly scar to show for the experience. I asked the surgeon to cut open the back of my arm but I guess he didn’t care much for aesthetics based on the look of it. But I am happy to have my arm fully functional again and now have something to remember Cambodia by!