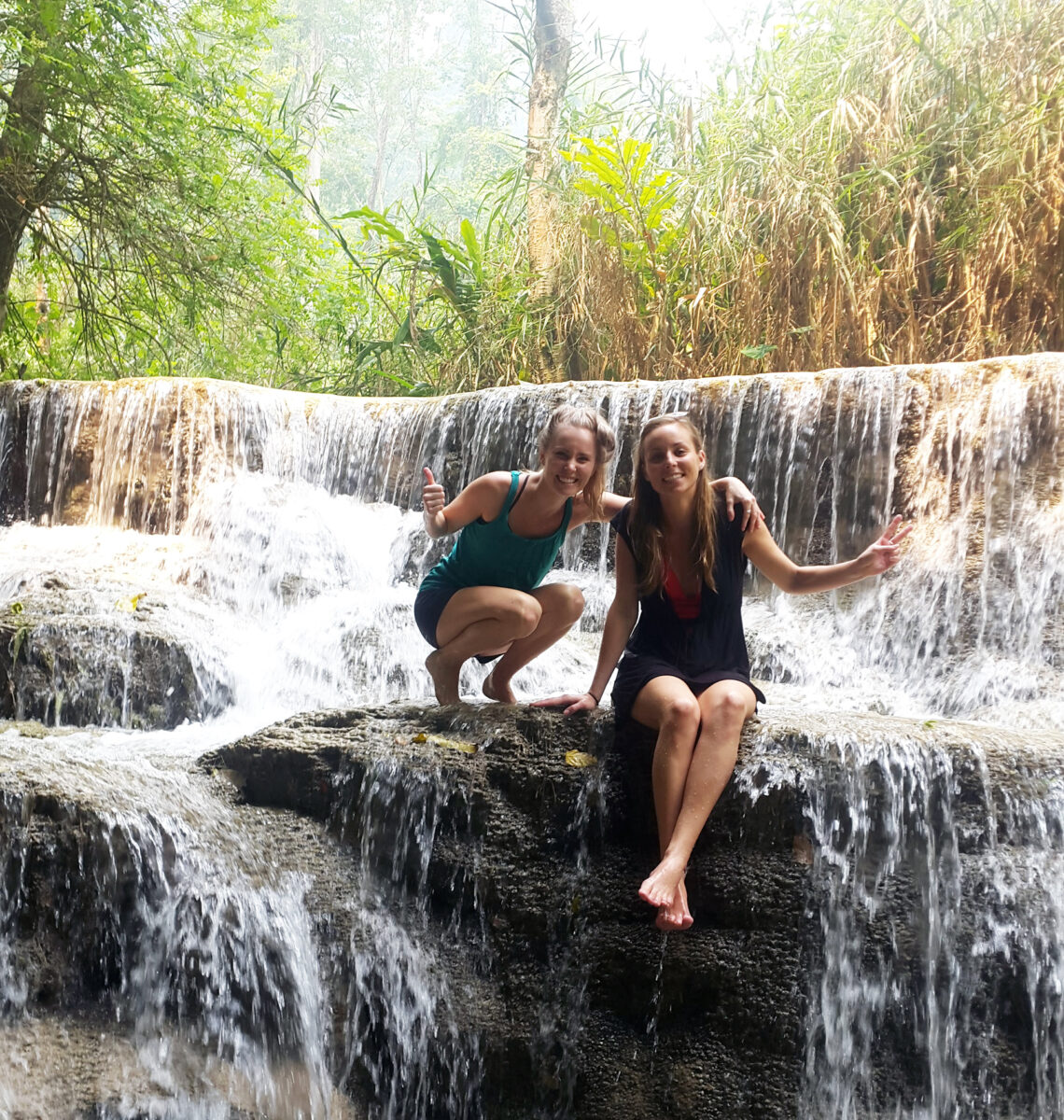 While living in Cambodia I tried to explore the South East Aisa as much as possible. So my sister and I decided to visit the cultural capital of Laos for a long weekend. I had been wanting to visit Luang Prabang for some time as I saw pictures of the pagodas and waterfalls and heard stories of the monks walking along the streets every morning. The city looked colorful, historical and set among the tropical mountains of South East Asia – so right up my alley of exploring nature and architecture.

Little did we know that we booked our trip during water festival. The amazingly crazy but dreaded water festival that throws any plan out the window or more literally down the toilet. My sister and I had been living in Phnom Penh for two years at this point so we really should have known. Especially because this is why we haad extra time off! But Cambodia doesn’t celebrate water festival as intensely for as Thailand, Laos and Myanmar.

Water festival is technically celebrating the new year and water is thrown on one another as an act of cleansing. However the the throwing water portion has been taken out of control into a full scale four day soaking wet water fight. Every local shopkeeper, pedestrian and resident is armed with an enormous water gun, fire hose or bucket ready to throw in your face – from grannies lurking in the bushes to children on rooftops – you can’t expect to go outside without getting drenched. Fire hydrants are often opened up or have hoses attached for soaking passersby.

So my sister and I land in Luang Prabang for a nice tourist holiday, but by the time we got in a taxi to our hotel we can see that something is off. The streets are full of people and there seems to be a never ending parade style traffic jam of pick up trucks filled with people blasting music. Once we got closer to town, we notice that the trucks also have full barrels of water for throwing on people as they drive by. Needless to say, we barely got to our hotel without our bags being soaked through.

Now what? We wanted to go get some lunch in one of the many river side cafes that Luang Prabang is known for, but the streets are so busy that taking a taxi or tuk tuk is impossible. We decided venture out anyways, trying to stick to our itinerary but wore our swimsuits under our clothes just in case we got wet again.

Our hotel offered free bicycles so we thought that these would allow us to weave through the hordes of people more quickly and hopefully avoid getting wet. That was our first mistake – trying to avoid getting wet. The people here are relentless and they especially enjoy drenching those who don’t want to get wet! Our second mistake was using the bicycles, as they definitely just slowed us down in the crowd and got us separated. Within ten minutes of leaving our guest house, we were both soaking wet. Luckily it was the typical 30+ degree day that South East Asia is known for.

We continued on to our destination, which was less than 2km away but seemed like forever. It was almost too dangerous to ride a bike as you couldn’t go fast enough to keep balanced and just ended up falling into more people. As soon as the locals could see that our hands were busy strolling our bikes along, we were defenseless targets and soon got separated. My sister tells me that she got dunked in a large bucket of water and lost track of her bike at one point. While I some how got covered in a sticky black tar substance and was just waiting for the feathers. Total mayhem ensued but we found each other after about 15 minutes and decided to give up on our destination and stop right there for a drink.

Luang Prabang is a Unesco World Heritage site, as it is the old capital of Laos, and the main centre is a little peninsula with a one way road around the perimeter. So we were going along this road which has lots of cafes overlooking the Mekong river. It was beautiful but hard to enjoy while being sloshed with water. We stopped to catch our breath, wipe the mascara off our faces and start strategizing how we were going to get to any cultural sites and how to get back to our hotel in this chaos. We managed to have a look around a few of the back streets that were less crowded, and eventually made it to some of the main temples of the city – albeit fully drenched.

On our second day we immediately got out of the city to go see some waterfalls and do a kayaking trip along the river. This was the beautiful Asian adventure that we had come for. However it was also burning season when all the farmers scorch their fields, so the sky was full of ash. We thought it was snowing at one point but our kayak guide explained to us that this is an annual thing – another Laos lesson.

Upon returning to our hotel that afternoon, we were bombarded once again by people on the streets. Anyone going out of their house was fair game to soak. There were still trucks of people and buckets driving around but we tried to avoid them. Now it was little children hiding on a balcony or around a corner with the biggest water guns you have ever seen. Kids of all ages would spray you and then run away in packs.

Peeking around corners to see if the coast was clear before walking down a street became our norm so we had no choice but to adopt the mentality of “if you can’t beat ’em, join ’em”. A local shop nearby was selling all of the water festival necessities, and we bought the biggest water guns that they had, along with safety glasses and plastic phone pouches. The shopkeeper let us upen up the water guns right there and filled them for us so we could protect ourselves on the way home. We had no mercy.

Water festival all of a sudden became a ton of fun instead of fear of getting shot at. It was fun being on this end of the soaking! At first I felt bad spraying little kids, but as soon as I saw them carrying a water gun as well, I remembered that they were going to spray me if I didn’t spray them first and then I let them have it. It was revenge soaking but also totally justified by the holiday. At this point everyone knew that if you were outside you were fair game and guaranteed to get wet.

Our trip quickly turned from a site seeing cultural tour to a maddened real life arcade game. It was me and my sister against everyone else. We learned to embrace the Laos water festival for the last couple days we had there. We didn’t go anywhere without our guns and strategized where we could refill. Shooting water at strangers in between visiting ancient temples and peering around corners for a dry street food stall was all part of the game now.

It wasn’t what we expected from a normally sleepy Luang Prabang, but definitely a trip to remember!