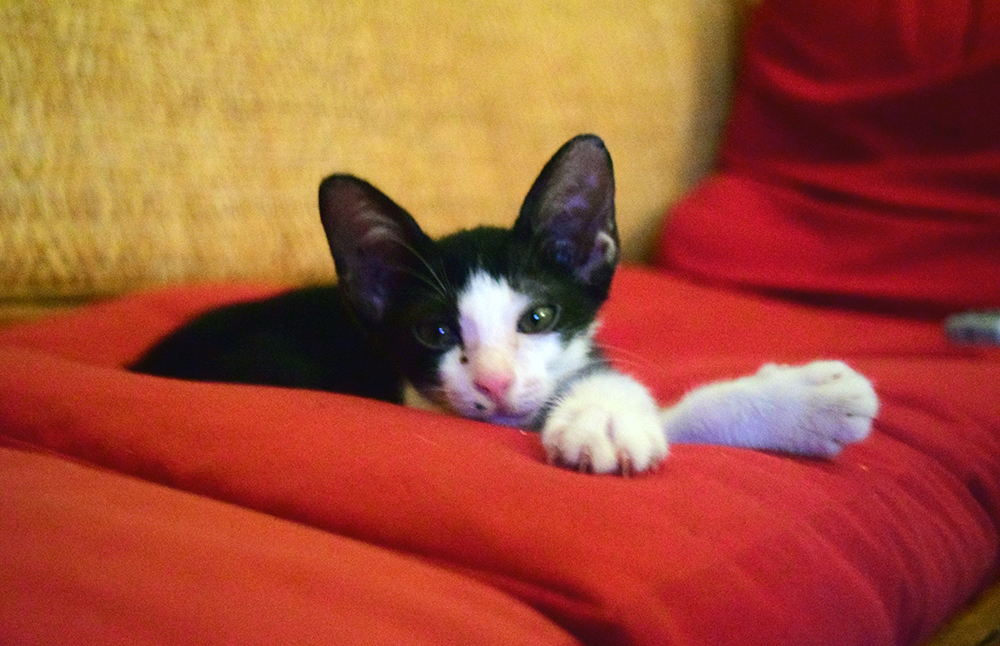 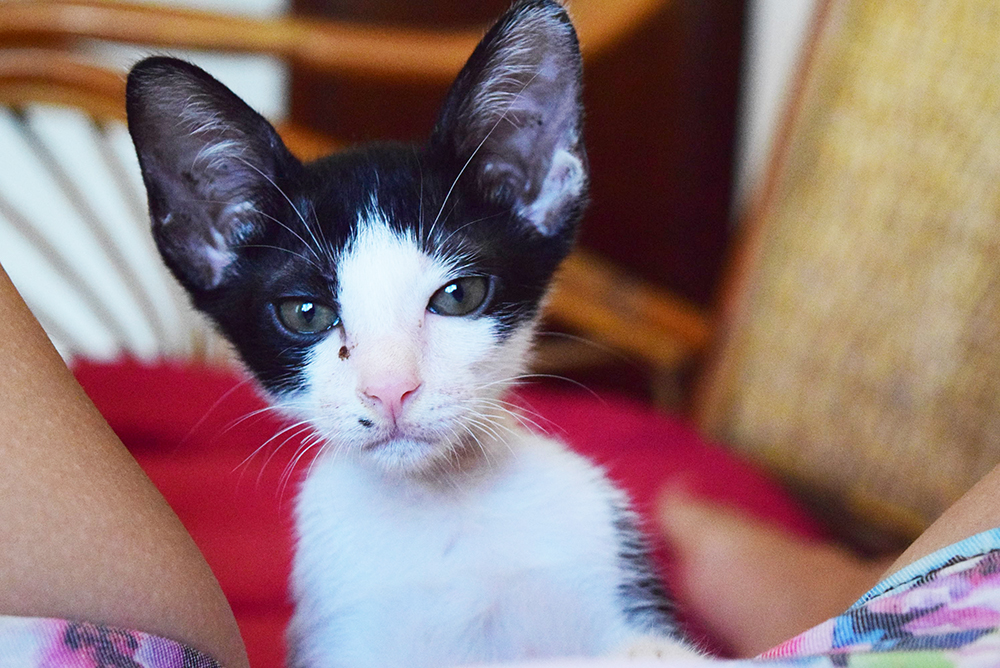 When you are living abroad, there are many hectic things to deal with so it is nice to come home to a friendly face, but sometimes you aren’t living there with family. Many animal loving people end up fostering or adopting a pet for this reason, and I guess I am one of them now. Mimi is my Cambodian cat. I have wanted a cat since my last one passed away but have been moving around so much that I didn’t think it made sense. Although after being settled in Cambodia for a year already without plans to leave I thought I was ready. And it being my birthday I looked around for anyone with some kittens.

In Cambodia, it isn’t hard to find as there are many strays and even the cats that people do feed, they do not nueter or care for them. People do not want to be responsible for the babies either so they often just throw the girl kittens into the garbage. One lady was walking her dog when she came across a handful of fresh born kitties and was kind enough to bring them home and nurture them back to health. She got them vaccinated and started looking for homes for them.

I saw this post on Facebook and went to go see them. There were about 6 kittens in a room only a week old. They were roaming around and climbing over everything. This one cat started clawing its way up my leg, definitely didn’t want that crazy one, so I picked up a few of the other normal ones. They had to stay there to finish some medicine and I was told I could pick one up in a couple of days.

On the way home I really wanted to adopt a Cambodian cat but thought that perhaps I am too irresponsible or transient. I thought about my options…. I could either get one and take her everywhere, two and they could keep each other company, or none which was probably the best option.  The next day I told the lady that I could not take any. However, a few days later she contacted me again saying there was only one left and cannot find a home for her. So as you can guess, I went to pick her up and of course it was the crazy one!

She was so small, she could sit in the palm of my hand. For the first week all she could say was mee, mee, mee, mee, so her name came naturally. Mimi was bouncing off the walls all day and all night like a wild animal. She was climbing curtains, clothing, furniture, trying to get as high up as possible and then attack when your not looking. I had brought a feral animal into the house!

Mimi began to grow stronger and bigger and always wanted to cuddle up under your chin, right on top of your neck like a scarf. This was cute at first but she gets a little bitey sometimes and it makes you nervous having her near your neck, especially as she got bigger! After a few months she loosened up and went in and out of the house, jumping through the windows and onto the balcony to chase birds and lizards, which she would bring into my room as a trophy. A real hunter I had.

Unfortunately from being left on the street at birth, Mimi has some abandonment issues and anytime I leave the house for a night or two she gets nervous and pulls out her fur. I tried not to leave her home alone too often but I liked to go away on weekends and cats are supposed to be independent. I brought her to a kitty day care if I went away for more than a weekend, and I was told she was making friends, so I thought maybe she wouldn’t be so lonely if another cat kept her company for a little bit of time.

Mimi Has An Accident

In comes Charcoal, another Cambodian cat younger than her and very mischievous. Supposedly they were friends at the kitty spa but when they came back tot he house, this was Mimi’s territory and she didn’t want to play. Mimi retreated away from the energetic kitten to wherever the little one couldn’t go. This was most often on the top of a cabinet. Then I didn’t see Mimi for a few days and went looking around the house for her. She was curled up in the corner behind a shelf with a broken leg!

Mimi must have jumped onto the shelf and missed or fallen off as her hind leg was dangling loose, no external wound but obviously in pain and not attached. She didn’t want me to touch her but I put her in a box and took her to the vet. There are a few options for a vet in Cambodia, and being the loving kitty mama that I am, I brought her to the good western one. He gave me a quote of almost a thousand USD to operate and fix her leg, she got x-rays and needed a steel rod to put the bone back together. Yikes, we then went to the Cambodian doctor, where they did it for a fraction of the price and were still pretty good I think.

Mimi got an operation and stayed overnight at the vet (abandoned again) and came home with a cone on her head and no idea why I was doing this to her. Now that she was on lots of medication, she couldn’t feel the injury and started running around immediately! They didn’t give her a cast, or a mini wheelchair as much as I asked them, but told me to put her in a cage to heal. This wasn’t very nice either so I got her a nice big cage which she continued to climb inside.

Needless to say her leg didn’t full recover and she still has a little limp but at least she can walk and play. A few months later I broke my arm and needed a steel plate to put the bone back together so now we are steel sisters! 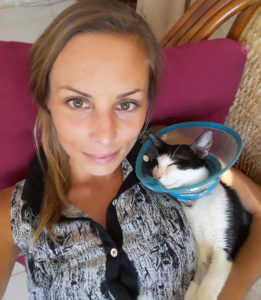 So now it has been over two years since I got her and we are like family. Not only does she wait for me at the door everyday to get home, but we also have a lot of catnaps and injury time together. After so many years of solo travel and moving around it is nice to have one constant in your life I realized, and for me, now that is Mimi.

So I am now in the process of getting her to Europe, but flights out of Cambodia that carry animals are rare and the paperwork is grueling. I have called every airline and they can’t even answer my questions let alone direct me to someone who can. I have a few more months before her vaccinations clear, so still have time to figure it out. The hardest part I think will be trying to make her understand why she is traveling, but in the end it will be worth it and we will be reunited again soon!

If you have any animal importing stories or advice I would love to hear it for part 2! 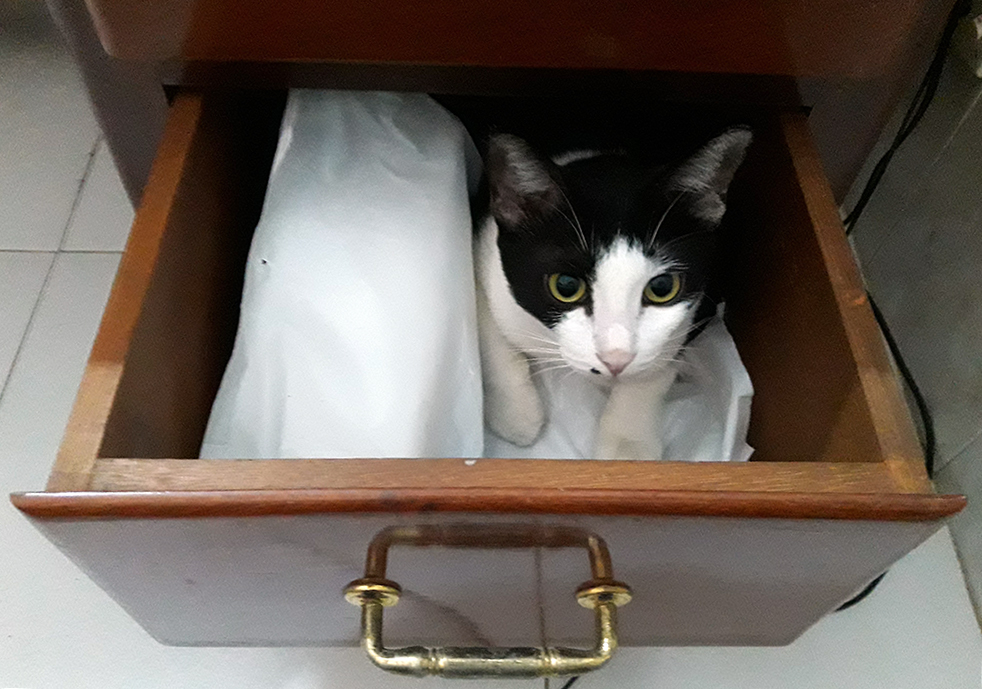