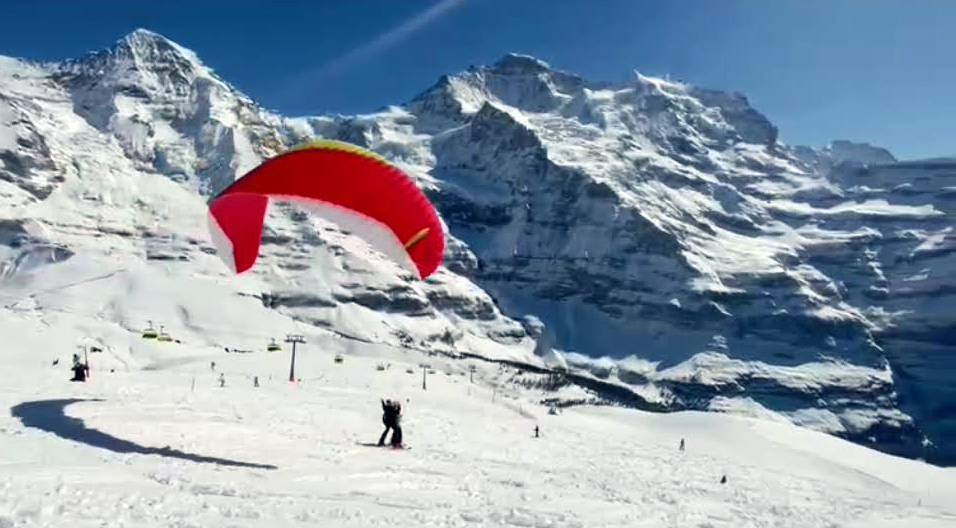 I can’t remember the first time I flew on an airplane, but I do remember instead of being scared, that I looked forward to getting candy before take off. Maybe that was back in the 90’s because I haven’t gotten any free candy on any flights lately, especially not on Ryan Air (although I did get free water once but that’s another story!).

This was my first time open air flying off the top of a mountain in the Swiss Alps. Even though I am not afraid to fly in an airplane, I still consider myself afraid of heights. I often believe that I am swaying in tall buildings and will not go near the edge at lookout points. Sometimes even while hiking steep slopes, I put my hands up like blinders to stop my legs from shaking!

However after living in the Swiss alps for a few years, many of my friends are paragliders, base jumpers and speed flyers, who do all kinds of crazy aerial sports that have never interested me. I enjoy the mountains with my feet on the ground. That was until a few days ago.

I think it is healthy to get out of my comfort zone once and a while, so this year I decided to get back on the skis (as I have been snowboarding for the past 20 years). This has been a challenge in itself, learning a new sport and attempting to pick up the speed before I have the skills.

Little did I know that skiing is the first step to speedflying (paragliding on skis which allows you to go faster). To paraglide, you essentially just run off a mountain with the parachute (called a wing) open behind you, so once it is full of air you can cruise around as you please. Now try this on skis in the winter.

With many of my friends doing this regularly, some are tandem pilots that take tourists for flights in the summer. During the winter they make promotional content and have fun on their skis in the air. So I happened to come across everyone just as they were looking for their next victim to film.

As I was on skis (for about the 5th time) and had never been up in the air they thought this was perfect. I had about 2 minutes to decide before I was being strapped up in a tiny harness with what looked like shoelaces. Then they clipped me to a friend and told me to hold the GoPro. I was shaking with fear and although I knew this guy was one of the most experienced flyers around, it was more the height and the shoelace harness that unnerved me.

Next thing I know he is counting down from three and we have to ski together straight down the mountain. It only took a few seconds before we were in the air, and a few minutes more before I could open my eyes. We were actually using a large wing so it wasn’t as fast as the smaller ones, which I was ever grateful for. However it was a lovely sunny winter day so the hot air was bringing us higher and higher.

It was incredible to be above the mountains I know so well, but it also felt very far away from them! I felt like a mosquito floating around. As my friend mentions that we would be hitting some turbulence, he adds that I don’t have to hang on so tight and should try to breath normally. I didn’t realize I had been hyperventilating for the past 5 minutes. I calmed down a bit but was still too scared to look directly down. My fingers were freezing as we drifted higher, and I just wondered how much longer it would be until I got my feet back on the ground!

Finally we were began to lower and he asks me if I ever get carsick. I knew it was a trick question but I still said “no” and the next thing I know we are spiraling down towards the ground just close enough so that our skis lightly touch the snow and go fly back up again. We did this a few more times which didn’t seem so scary as the being up 3000 meters.

After another 10 minutes of cruising up and down and around, pointing out glaciers and deep crevasses, we finally went towards our landing point. It was a very smooth landing just behind the ski lift, that even as a novice skier I had no difficulty. Within a few minutes he packed up the wing, we were back on the lift and it was all over.

I was incredibly happy to be back on solid ground and that I didn’t pee my pants. My heart was still rushing from the adrenaline for the rest of the day, but now I’m just wondering when I will have the guts to do it again!

See what else I get up to in Switzerland: