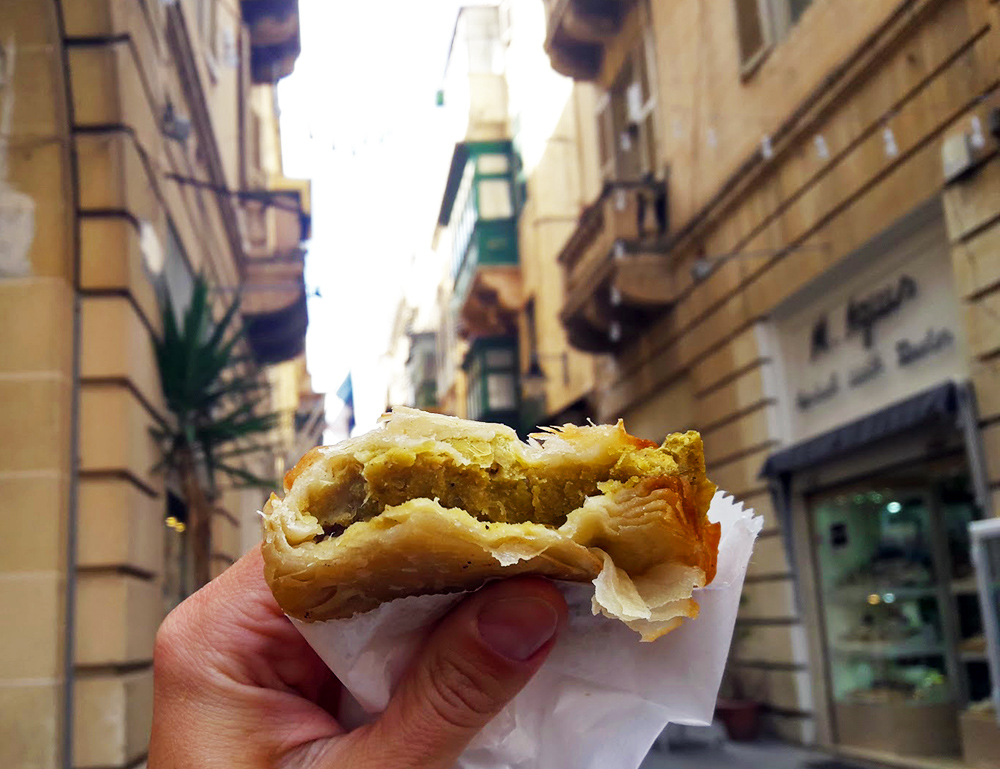 I love Malta and Malta loves food, quid pro ro, I love Maltese food! It’s fresh and plentiful and a breeze for a vegetarian. Malta is full  of great restaurants serving dishes you won’t find anywhere else. I came to Malta on a whim, on a very brief promise of sun and solitude. I barely knew where it was, only that flights were cheap and the food was fresh. That was enough. It hasn’t been a lot of sun or solitude, but there were lots of cats and the food has well surpassed its reputation!

Since my first taste of Malta, I moved here in 2018 and am still loving all the food! 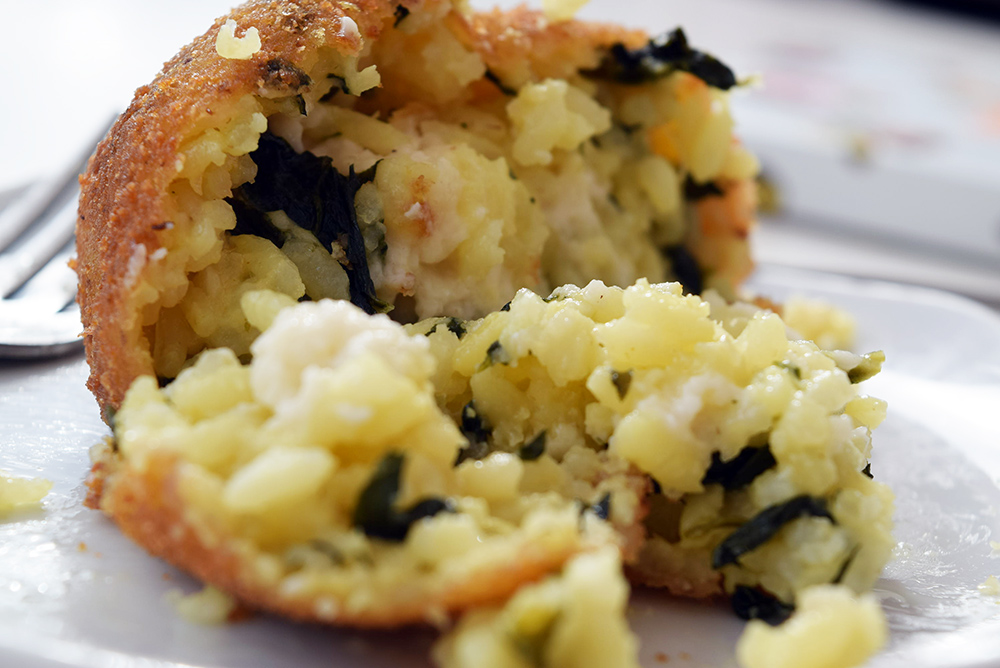 Coming to eat is more than enough reason to visit Malta! It is a small country in the Mediterranean between Italy and North Africa, and has changed power every few centuries throughout its history. This turned out to be a good thing for the cuisine, as they pulled the best dishes and ingredients from all the surrounding areas and tied it to local produce and resources. There’s the Italian influence of olive oil, pasta, pizza, then French bakeries and Greek meats and pastries, but also Lebanese goodness like stews and preserves, Spanish tapas, and even the good old English breakfast!

There are probably many more cultural influences that I couldn’t recognize. However I wanted to highlight the items that made my stay here so memorable and delicious. Everyday I was trying new items (and going back for seconds) as the vegetarian options are abundant and fresh. 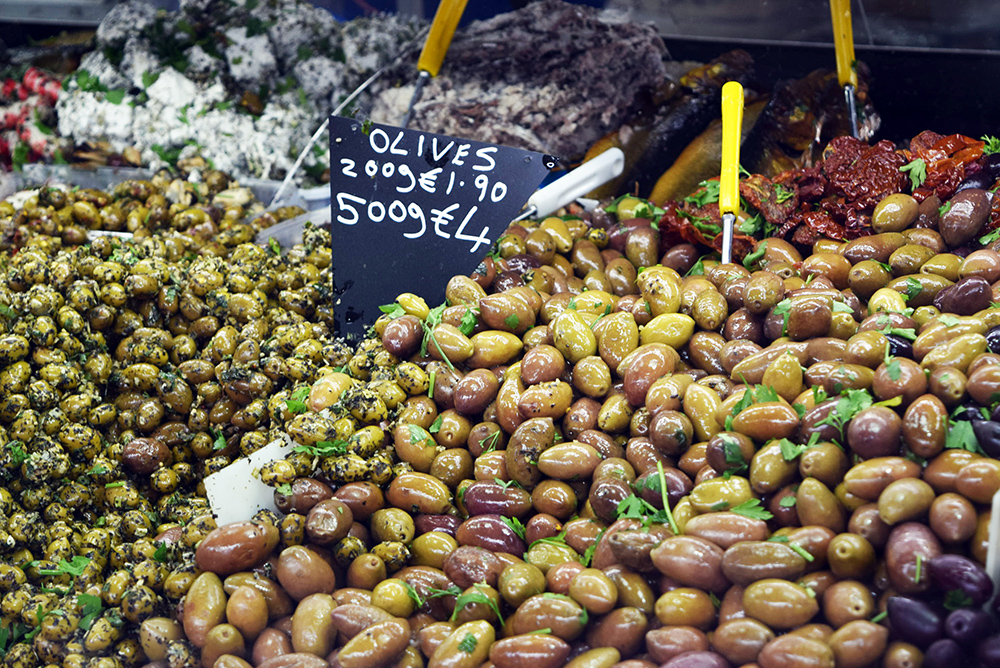 I saw these little pastries everywhere and before I ever heard of it, and actually bought a few by accident! Once I knew what they were though, I was eating them everyday as a little snack. Pastizzis are like little croissant pockets with any filling you like. It is usually cheese or peas and for less than 50 cents a pop, so its easy to eat a lot. As you walk down any street you will see these by the dozens in the windows. There’s even a 24hr pastizzi bakery next the the Mdina which is baking all night long! Perfect for a midnight snack.

Again, I ate this before I knew what it was, I just ordered “something local” off the menu. As my ftira arrived, I was surprised to see two enormous sandwiches on the plate since the lady told me it was just a small snack. After I took a bite though, I had to know what it was and how to say it so that I could order it again! Its actually a very simple sandwich, but the fluffy circular bread is what makes it unique and the fillings are all very fresh. Usually it is filled with a homemade tomato paste, olives, tuna, cheese, capers, all super local and delicious… and again, super cheap 2-3 euro and it will fill you up! 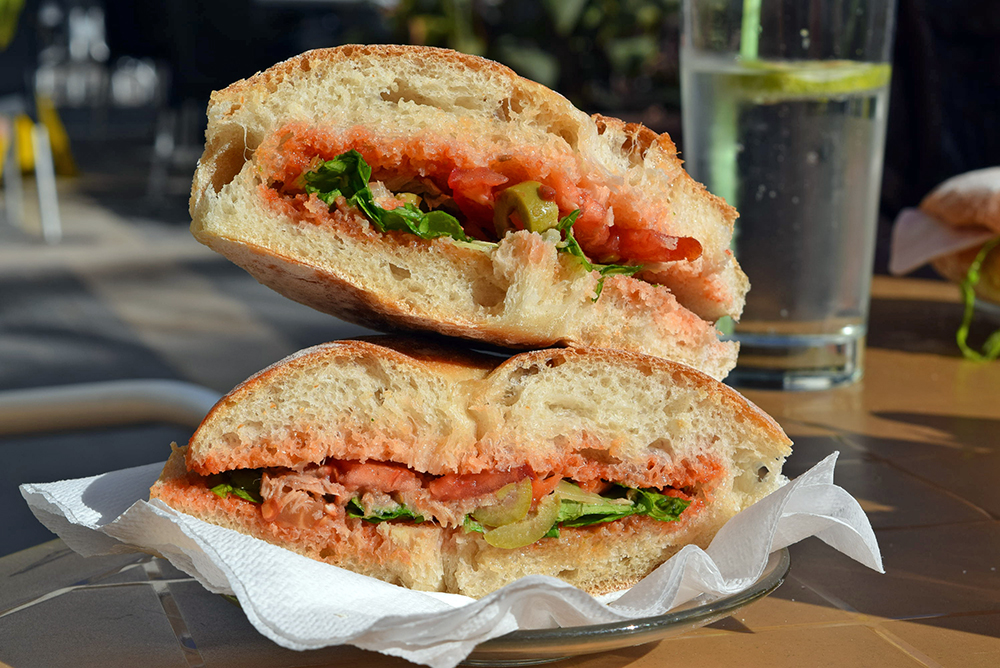 Now I didn’t actually try this one, because I don’t eat rabbits but it was on every restaurant sign so I figured it was the main dish.  I had the Widow’s soup instead, which is a traditional  dish made from all the cheap veggies during winter time. It was nice on rainy days since it can be colder inside the houses than out, but I think it has become more of a tourist trap now. It was delicious and I am a soup lover but it was mostly offered in the cities and much more expensive than other dishes. Who would pay over 10 euro for soup when everything else is dirt cheap??

There’s no shortage of fermented goods here so I am a happy lady! Every dish has some olives or capers thrown in which adds a bit more saltiness. I went down to the Sunday fish market in Marsasloxx and met the nicest old lady at selling homemade capers (if you make them, or pickle them? whatever…) she told me her whole story so I had to buy some and ate them nonstop in everything for 2 weeks. Delicious. 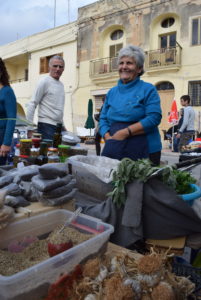 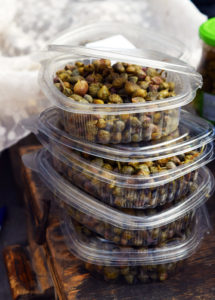 This is normally served as a dip on the side or one of the ingredients in a Maltese platter you would order at a restaurant. It’s a bean dip like hummus but made with a different type of bean (Bigilla). To eat it, you use a small round cracker (galletti) to dip. Very tasty and filling. You can also buy it premade in the shop for quite cheap. 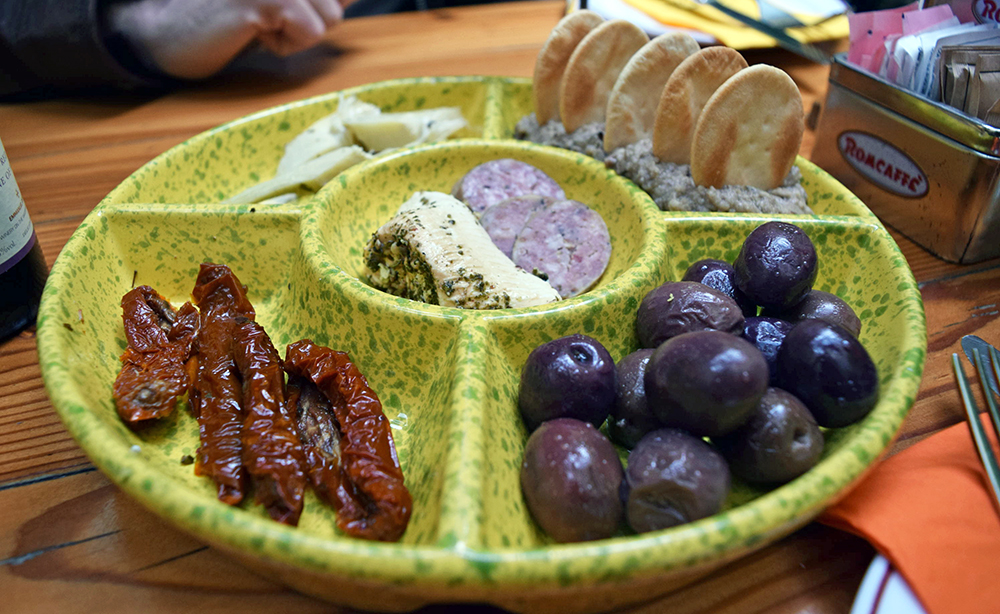 Every little grocer has a window of baked goodies for takeaway. Literally, when you step inside any shop, you can buy toilet paper, some fruit, cigarettes and  then they have a selection of home baked pasta.  This is usually in a large tray and they cut you a hefty piece (perfect after a full day hiking). Normally it is some macaroni with meat sauce covered in cheese or spinach, olives and cheese alongside the pastizzi, pies, and calzones. I am amazed that by the end of the day most of the shelves are empty, so definitely get in there while they are hot and there’s still a selection.

This isn’t originally Maltese, but the arancini fits into their culture perfectly with the ready made pastries. There is plenty of delicious Italian food everywhere in Malta, but the napolese pizza and arancinis were my favourite. Arancini is sort of like a ball of cheesy risotto with any flavour you like then deep fried to have a crispy outside. I had tried them before in restaurants in Canada, but never seen them so large! The arancinis in Malta were larger than a baseball and had so many flavours to choose from that I had to get one every day. When you cut it open, the cheese melts out and at only 2 euro, how can I stop?!? 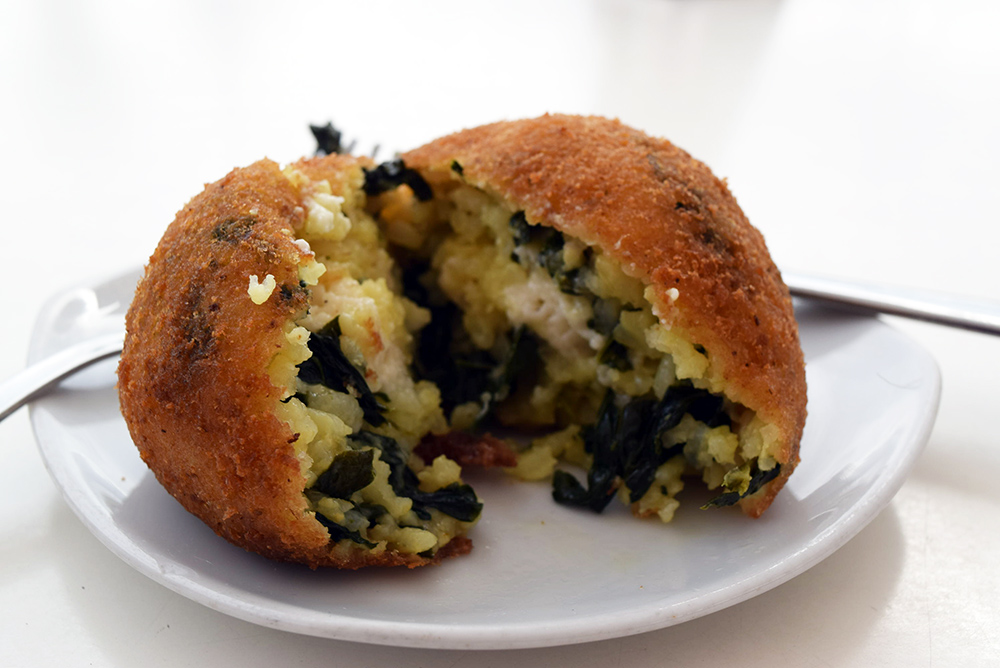 Just kidding! I never even saw these chocolate treats here with such a selection of cakes and deserts, but the name made me think! 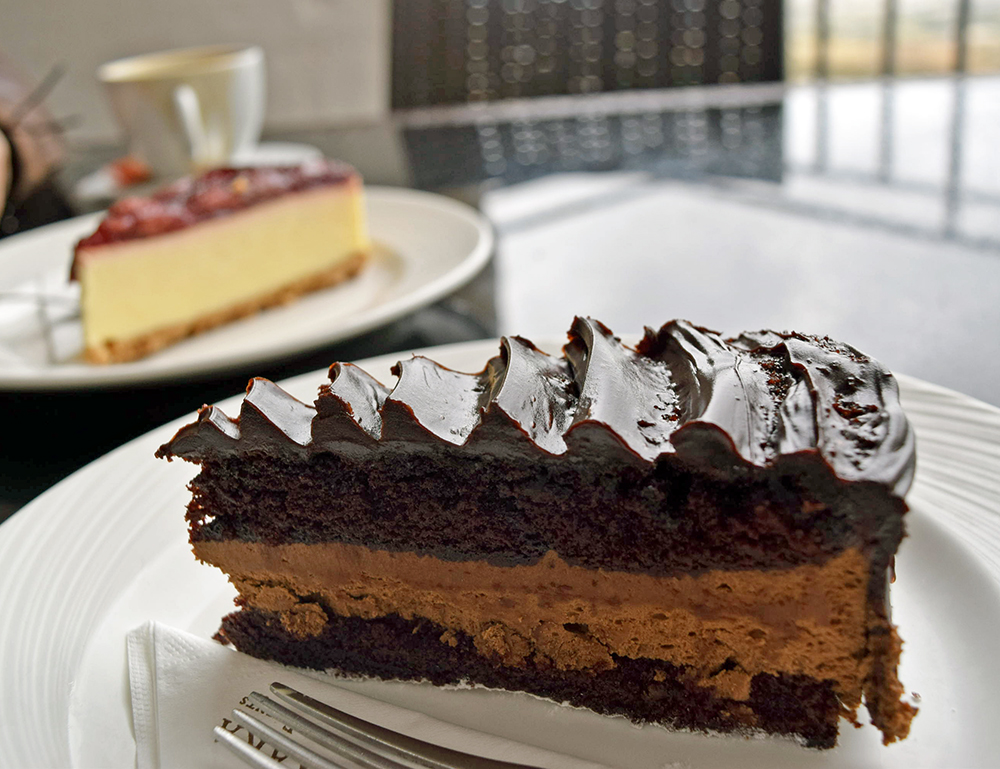 These are just a few of the staples I enjoyed in Malta, of course there are many more delicacies.  One of my other favorite dishes were grape leaves which I rarely find but absolutely love. Everywhere I looked people were sitting outside having a coffee, actually more likely a beer, and a snack. I would look around at what others were eating to make notes on what to order later. I like eating what local and everything I saw and tasted was superb and filling.

In Valletta, I was telling a man that every time I order a snack or sandwich, I am given two. I wasn’t sure if I ordered wrong the dish is just that big that maybe it’s just a big one cut in half. How he responded sums up the Maltese cuisine, “the Maltese serve big portions of good food, because if not, they will not stay in business, the Maltese like to eat” now I get it, and I love it!

Update! After living in Malta for a year, see my list of favourite places to eat around the islands in my google food map. 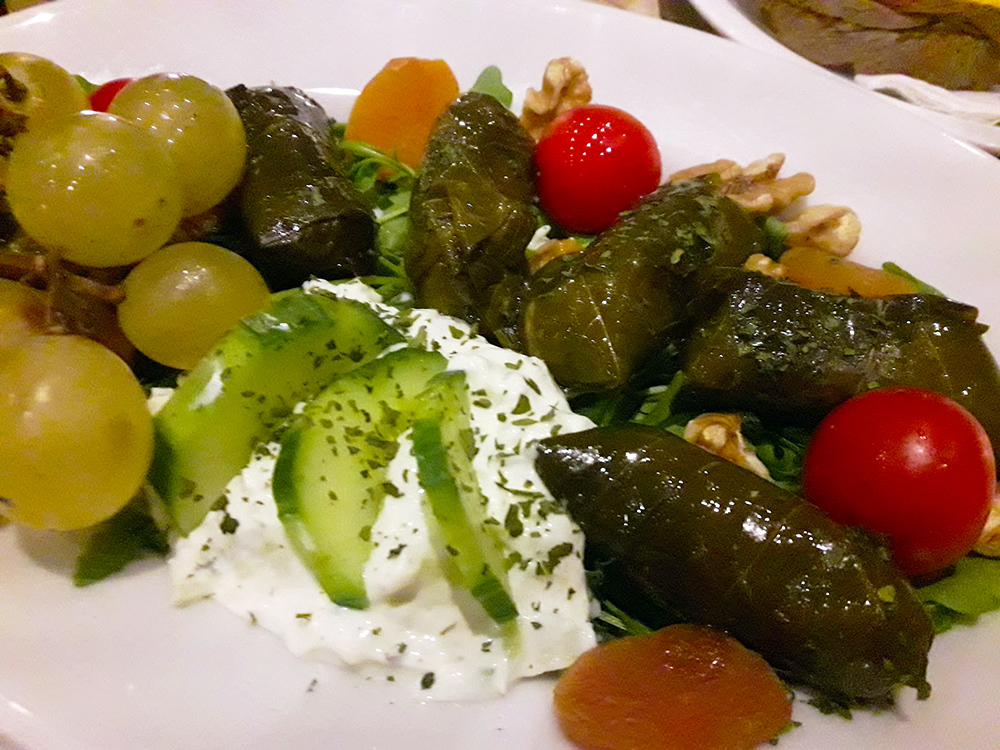 If your coming to Malta, why not take a food tour with Tara!